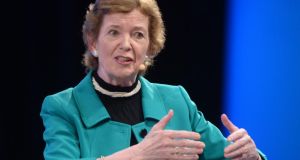 Former president and UN envoy Mary Robinson: Developing countries must be right there at the beginning and not locked into dirty fossil fuel infrastructure. Photograph: The Irish Times

Speaking at a climate conference in Dublin today, former Irish president Robinson questioned the view that those countries should be afforded more time to reduce their carbon footprint, and said such views are no longer acceptable if the planet is to eradicate carbon emissions by 2050.

“The impacts are going to be worse on developing countries and communities, so they must be right there at the beginning and not locked into dirty fossil fuel infrastructure,” she said.

“It is unreasonable to expect developing countries to reduce emissions on their own at an equivalent stage of development to when British countries were dramatically increasing theirs. The only feasible way to achieve this is through the provision of support, both financial and technological,” she added.

Her comments come in the aftermath of last year’s Lima agreement on climate change, which produced the first ever unilateral international dedication to curbing greenhouse gas emissions.

The deal is set to be formally ratified at the UN Climate Change Conference in Paris in November, making 2015 the single most important year in the history of climate change as Ms Robinson sees it.

She said “2015 is an historic year in which a robust set of agreements must be adopted which will guarantee a pathway to ending extreme poverty, to reduce inequality, and to minimise risks posed to development from climate change.

“Climate change forces us to consider a completely different way of doing things- a complete transformation. Business as usual with a little greenness attached won’t be enough. That approach will lead us to a world which is four degrees warmer than pre-industrial levels.”

She informed the audience that Ireland needs to continue to lead the way in tackling hunger and nutrition issues within the global community, which will entail a renewed dedication to climate justice on the State’s behalf.

Speaking at the same conference, which was organised by the Institute of International and European Affairs, climate expert Christopher Delgado outlined how inhabitants of developing countries have the most to lose if positive change does not occur.

In a statistical presentation, he revealed that soaring demand for timber and pulp among Brazil, Russia, India and China is complicating matters in light of recent progress made regarding deforestation. And he noted how certain agricultural emissions in south Asia remain four times higher than western European levels.

Meanwhile, Green Party leader Eamon Ryan has accused the Government of damaging the cause of conservationism in Ireland due to its handling of the water charges.

“The Government gave up on conservation with what they’ve done, and I think that’s a real pity,” said the former minister for energy and resources.

“The flat-rate charge doesn’t have the same conservation incentive. I think they did that for political expediency reasons rather than necessarily being opposed to conservation, but that is the outcome of what they’ve done,” he said.

He was also critical of left-wing parties in opposing tax increases.

“The Irish left seems to be very strongly opposed to property taxation as well, and that’s bizarre from my perspective because that’s one of the main areas where wealth is held in Ireland.

“What is the left for if it isn’t for taxation on wealth, and for the involvement of the State in various different ways in our society?” he said.

1 Mandatory quarantine and flight cancellations unlikely despite rise in cases
2 California shuts down again as US coronavirus cases surge
3 Mandatory quarantine ‘desirable’ amid concern over flights from abroad
4 US passengers fly into Dublin: ‘I’m here for six days. I guess I’ll have to stay inside’
5 Half of Covid-positive workers in meat plant were asymptomatic, reports show
Real news has value SUBSCRIBE