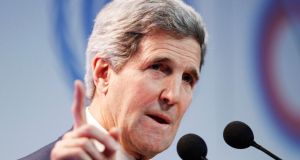 US secretary of state John Kerry speaking in Lima: “We can rise above the debates that have dragged us down . . . for the sake of our children and our grandchildren”. Photograph: Enrique Castro-Mendivil/Reuters

If an ambitious agreement is not reached urgently to tackle the grave threat posed by climate change, it would be seen by future generations as a “massive collective moral failure”, according to US secretary of state John Kerry.

In a powerful and impassioned speech at the UN’s Lima climate conference, he said every nation had a responsibility to take action. “We can rise above the debates that have dragged us down ... for the sake of our children and our grandchildren”.

Witrh Peruvian fighter jets screeching over the conference venue and former US vice-president Al Gore sitting in the front row, Mr Kerry conceded that there was “no silver bullet”, but said “science is screaming at us, compelling us to act”.

Citing 97 per cent agreement among scientists that man-made global warming was real and happening now “versus the paucity of a few industry-paid-for false analyses that say otherwise”, he said this was a “stark reality” that the world had to face.

A one-metre rise in sea levels would “displace hundreds of millions of people worldwide, putting entire cities and even countries at risk”, but this “doesn’t have to be inevitable” because there was “nothing pre-ordained about the course we are on”.

Mr Kerry warned that the “window of opportunity” to address climate change was “closing quickly”, so the issue was urgent. “We need to get an ambitious climate agreement ... giant, measurable clear steps forward that will set us on a new path”.

The former US senator said he found it “kinda troubling” that he been at all of the major UN climate conferences since the 1992 Earth Summit in Rio de Janeiro, and here he was in Lima 22 years later and there was still no agreement on the issues.

“I know discussions can be tense and decisions can be difficult. I know the debates over who should do what, but the fact is we simply don’t have time. It’s everyone’s responsibility. It’s the net amount of carbon that matters, not each country’s share.”

Calling on all countries to play their part, Mr Kerry said he had come to the Peruvian capital, however briefly, “in order to make sure that we get this right ... This is not insurmountable. Mankind created the problem and mankind can solve the probem.”

He cited the recent agreement between the US and China on curbing their emissions — together accounting for 40 per cent of the global total — as a “historic milestone” that other countries were already following, including EU member states.

Without naming any country, Mr Kerry said: “If you’re a big developed nation and not helping to lead, you’re part of the problem.” That was why US President Barack Obama and himself “recognise our responsibility to lead the global response”.

Addressing the development needs of poorer countries, the US secretary of state said: “Coal and oil may be cheap ways to power your economy in the short term, but look further down the road and there are far-reaching costs. It’s not cheaper.”

He pointed out that air pollution contributes to the deaths of 4.5 million people a year, while Typhoon Haiyan had cost the Philippines $10 million. It was time for countries to “do some real cost accounting and factor in the cost of survival itself.”

Mr Kerry predicted that renewable energy such as solar and wind would become a multi-trillion dollar market in the coming years, offering “a whole bunch of jobs”, as well as health and other benefits. “The only question is whether we can do it fast enough.”