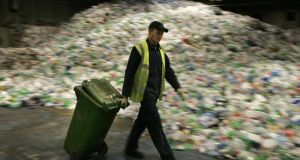 Ireland has more than tripled its recycling rate for municipal waste over the past decade. Photographer: Dara Mac Dónaill

Ireland has more than tripled its recycling rate for municipal waste over the past decade – a performance equalled only by Britain, according to the Europe an Environment Agency.

In a report released yesterday, the agency says Austria, Germany and Belgium recycled the largest proportion of municipal waste in Europe in 2010. But many countries risk falling short of legally binding recycling targets.

“In a relatively short time, some countries have successfully encouraged a culture of recycling, with infrastructure, incentives and public awareness campaigns. But others are still lagging behind, wasting huge volumes of resources,” it says.

Overall, 35 per cent of municipal waste was recycled in Europe in 2010 – up from 23 per cent in 2001. However, it said many countries “will find it extremely difficult to meet EU-mandated targets to recycle 50 per cent of household waste by 2020”.

They would need to make “extraordinary efforts”, the report says. For example, Bulgaria and Romania would have to increase recycling by more than 4 percentage points per year – something no country managed to do between 2001 and 2010.

Britain increased its recycling rate from 12 to 39 per cent between 2001 and 2010, while Ireland raised recycling rates from 11 to 36 per cent over the same period. Slovenia, Poland and Hungary have also “dramatically improved” recycling rates.


[CROSSHEAD]Record breakers
[/CROSSHEAD]Recycling rates are highest in Austria (63 per cent), Germany (62 per cent), Belgium (58 per cent) and the Netherlands and Switzerland (51 per cent each). Ireland, Poland and Norway did most to reduce the proportion of municipal waste going to landfill.

The share of waste in Ireland going to landfills “reduced significantly” from 77 per cent in 2001 to 53 per cent in 2010, and this enabled the State to meet its EU landfill directive target by a “reasonable margin” – thanks largely to the recession as a “key driver”.

Sharp increases in the landfill levy also had an impact. But the report warns that landfill reduction targets for this year “are at risk of not being met without considerable policy effort”; this was “partially undermined” by lack of regulation of waste collection.