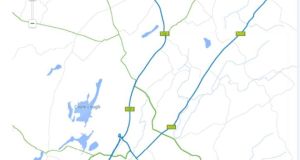 The Gort-Tuam motorway is a public-private partnership project. Thus, the Direct Route consortium (Roadbridge, John Sisk and Lagan) may be entitled to claim compensation if traffic levels fail to meet the NRA’s projections.

The Gort-Tuam motorway in Co Galway, now under construction at a cost of€550 million, is destined to become another of Ireland’s “ghost motorways”, according to traffic projections analysed by The Irish Times.

The 57km, four-lane motorway “will replace the existing N17/N18 roads, remove several bottlenecks, ease congestion in a number of towns and boost the region’s economy”, the Department of Transport maintains.

It also describes the route as a “significant part of the Atlantic corridor” that would ultimately link Cork with Sligo and onwards into Co Donegal, with the aim of providing an artery in the west to counterbalance Dublin.

But in response to queries, the National Roads Authority (NRA) has said that the southern section of the route would carry 8,158 vehicles per day, while the northern section, between the N63 and Tuam , would carry 7,289 when it opens in 2018.

Thus, in 15 years, the Gort-Tuam motorway would be operating at less than a quarter of its capacity. Yet the NRA says it was always planned as a motorway rather than a less ambitious and significantly cheaper “2+1” road.

The projected daily traffic flow on the motorway when it opens is actually less than the 8,490 vehicles per day using the 16km N2 Castleblayney bypass, a “2+1” road where the third lane alternates in direction to allow overtaking.

Yet the NRA’s cost-benefit analysis of the Gort-Tuam motorway suggests there would be a four-to-one return on investment, even with lower traffic volumes, and a seven- to-one return if traffic levels turn out to be much higher.

Part of the motorway, between Tuam and Galway, will become an attractive commuter route – despite the Government’s Smarter Travel policy, under which 500,000 additional commuters are expected to switch to alternative means of travel.

Asked if this had been factored in, NRA spokesman Seán O’Neill said it was “providing road infrastructure in line with Government policy” and that new motorways were also designed for bus usage.

The new Gort-Tuam motorway “will reduce end-to-end journey times by around 20 minutes”, according to the NRA, as well as bypassing Tuam, Ardrahan, Claregalway, Kilcolgan, Clarinbridge and Gort by the time it opens in 2018.

But James Nix, policy director of An Taisce, said the existing N18 between Oranmore and Claregalway was “more than adequate” to cater for traffic. “In other words, taxpayers have been made to borrow – and repay – €250 million needlessly.”

The projected traffic levels would put the Gort-Tuam route well behind the State’s worst-performing motorways – the M9 to Waterford and the M3 through Co Meath – both of which carry 20,000 vehicles per day, according to the NRA.

Like the M3, the Gort-Tuam motorway is a public-private partnership (PPP) project. Thus, the Direct Route consortium (Roadbridge, John Sisk and Lagan) may be entitled to claim compensation if traffic levels fail to meet the NRA’s projections.

Nearly €8 million in public money was paid last year to PPP operators of the Limerick Tunnel (€5.2 million) and the M3 (€2.66 million) because of “revenue guarantees” in their contracts to compensate them for lower-than-expected traffic levels.

No compensation had to be paid in relation to the underperforming M9 – which carries as little as 9,000 vehicles per day on its southern section – as it was financed directly by the State and is not currently subject to road tolls.