Energy and chemical sectors among biggest polluters in 2013 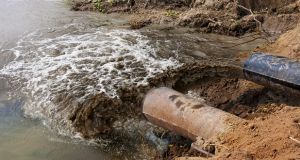 The EPA says it carries out “detailed quality checks” on submitted data before reporting to the European Commission. Photograph: Getty Images

The energy, mineral and chemical industry sectors reported the largest quantity of pollutant releases in 2013, figures published by the Environmental Protection Agency show.

The agency published a report on Thursday on Ireland’s 2013 European Pollutant Release and Transfer Register for large industrial facilities.

Overall there was a reduction in pollutant releases from the energy and mineral sectors at 11 per cent and 5 per cent respectively compared to 2012. There was no significant change in pollutants released by the chemical sector.

The report covers releases of pollutants in 2013 to air, water and waste water, as well as off-site transfers of waste from certain classes of activity covered by European and national pollutant legislation.

Some 369 facilities were covered by reporting requirements for pollutant releases and off-site waste transfers in 2013, down from 380 in 2012. They include businesses in sectors including mineral, chemical, food and drink, intensive agriculture, waste and large urban waste water treatment plants.

A total of 91 pollutants are covered by the legislation.

Overall, however , releases of carbon dioxide fell by 9 per cent compared to 2012. This was attributed largely to more renewables and less carbon-intensive fuels being used in electricity generation in 2013.

Releases of ammonia to the air came predominantly from the intensive agriculture sector and were down just 2 per cent in 2013 compared to the previous year.

Total phosphorus releases increased by 7 per cent compared to 2012 due to higher releases from a number of the large urban wastewater treatment plants.

The EPA report noted that the Ringsend wastewater treatment plant in south Dublin reported the largest quantities of total nitrogen and total phosphorus releases in 2013.

EPA programme manager Dr Jonathan Derham said the data showed “a positive downward trend for some of the key pollutants”.

“This is particularly notable in terms of releases to air from the energy sector. Here, we are seeing the impact of higher penetration of renewables in power generation in addition to the improvements in abatement measures over the last number of years.”

Dr Derham said trends in releases of pollutants to water were “quite mixed”.

“Large urban waste water treatment plants continue to be the major source of releases of nutrients to water such as total nitrogen and total phosphorus and it is important that such plants implement ongoing nutrient removal measures to ensure compliance with their EPA licensing conditions.”

The facilities who must complete annual returns for the report include both EPA-licensed and unlicensed industrial and waste management facilities.

The agency says it carries out “detailed quality checks” on the submitted data before reporting to the European Commission.