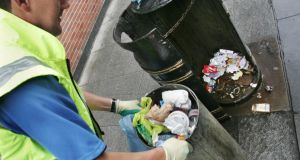 National policy plans to eliminate landfill use for untreated waste by 2020. However, the eastern-midlands plans envisage stopping any unprocessed or general black bin waste going to landfill by next year. File photograph: Matt Kavanagh/The Irish Times

Some €360 million needs to be spent within the next six years on infrastructure to manage and regulate the waste of just over half the population of the State, according to a new waste plan for the eastern and midlands region.

The Eastern-Midlands Region Waste Management Plan 2015-2021 aims to eliminate unprocessed or “black bin” waste going to landfill from next year; to increase recycling rates from 40 to 50 per cent by 2020; and to reduce the amount of household waste generated by 1 per cent each year.

Most of the investment is expected to come from the private sector, with €60 million of State funding required over the period. A large portion of the public funds will be used to shut down and clean up landfill sites.

The plan is the first published under the 2012 national waste policy, which saw the number of waste management planning regions reduced from 10 to three. The eastern-midlands region includes the four Dublin local authorities as well as Wicklow, Kildare, Laois, Offaly, Westmeath, Longford, Meath and Louth.

The State’s remaining counties fall into either the Southern region, or the Connacht and Ulster region, but the eastern-midlands plans will cater for more than half the population with more than 2.2 million residents.

The plan contains more than 60 measures designed to prevent waste being generated, or to deal with waste in a more sustainable way.

Much of the focus is on reducing the use of landfill sites. National policy plans to eliminate landfill use for untreated waste by 2020. However, the eastern-midlands plans envisage stopping any unprocessed or general black bin waste going to landfill by next year.

Only three landfill sites in the region currently accept municipal waste, Drehid in Kildare, Ballynagran in Wicklow and Knockharley in Meath.

The region has 153 closed or “legacy” landfills which require varying degrees of work to make them safe.

The plan also aims to eliminate “unmanaged” household waste. It is estimated that more than 63,000 tonnes of waste generated by householders in the region is not collected by licensed waste operators.

Dublin City Council has already introduced bylaws requiring householders to sign up to an authorised waste collector, and the plan will require each local authority to introduce similar bylaws by 2018.

It also seeks to “enhance the enforcement of regulations” to ensure householders, including apartment residents and owners, are managing waste in accordance with legislation.