‘It’s really cold outside. . . man, we could use a big fat dose of global warming’ 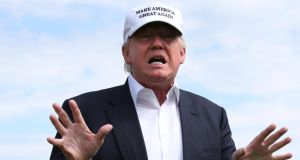 Donald Trump: “The concept of global warming was created by and for the Chinese in order to make US manufacturing non-competitive.” Photograph: Andrew Milligan/PA Wire

The concept of global warming was created by and for the Chinese in order to make US manufacturing non-competitive. (November 2012)

It’s snowing & freezing in NYC. What the hell ever happened to global warming? (March 2013)

Any and all weather events are used by the GLOBAL WARMING HOAXSTERS to justify higher taxes to save our planet! They don’t believe it $$$$! (January 2014)

This very expensive GLOBAL WARMING bullshit has got to stop. Our planet is freezing, record low temps, and our GW scientists are stuck in ice. (January 2014)

It’s really cold outside, they are calling it a major freeze, weeks ahead of normal. Man, we could use a big fat dose of global warming! (October 2015)