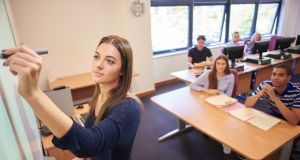 ‘Another cohort of teachers will commence their careers in the coming days, on significantly lower pay than their colleagues.’ the TUI said. Stock photograph: iStock

The Teachers’ Union of Ireland (TUI) has warned that it may take industrial action over pay discrimination against newly recruited teachers.

The union on Tuesday expressed its deep frustration over the delay by Government in “committing to a clear timeframe for the restoration of allowances for new and recent entrants to teaching.”

This amounted to a pay cut of approximately 20 per cent compared to their colleagues.

“Another cohort of teachers will commence their careers in the coming days, on significantly lower pay than their colleagues. It is time to demonstrate that these teachers are properly valued. It is time to end the discrimination that is undermining the morale of the profession,” said Ms Irwin.

The union warned that it may be “forced to activate an existing mandate for industrial action should urgent and meaningful progress on this critical issue not be made. “

Earlier this month the other second-level union, the ASTI warned that hundreds of secondary schools could close next month unless demands to improve teachers’ pay and conditions were met..

A series of meetings about issues relating to pay for newly qualified teachers have been held since July between officials from the Departments of Public Expenditure and Education and representatives of the TUI and the primary union the INTO. However, TUI has described the pace of progress in recent weeks as ‘unacceptably slow.’

In a statement on Tuesday the Department of Education said “The parties have reported productive progress in the discussions to date and the aim is to conclude the current discussions by early next month.”