Ministers are above all local politicians at the mercy of constituents, audience told 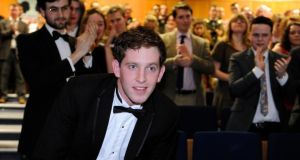 William Courtney, UCD Medical Society, at the announcement that he was the individual winner.Photograph: Dave Meehan/The Irish Times

“The house always wins,” said William Courtney of UCD Medical Society speaking of an Oireachtas with the “strongest whip system in western Europe”.

But the house did not win at the 54th Irish Times Debate final as three speakers opposing the motion that “This House believes the Irish political system has served the people well” , took home the top prizes on Friday night at the Law Society in Blackhall Place.

“As a proud Cavan man I do love a bit of local politics. All you need to do is mosey down to the local wake with a fresh barmbrack in your hand and the next thing you know you’re running the healthcare system,” Mr Courtney said opening his argument in a mock thick Cavan accent.

Referring to Mr Courtney’s “outstanding capacities” presiding adjudicator Mr Justice Adrian Hardiman of the Supreme Court, who was an individual winner in 1970 and 1973, said there was “no need to make notes because many of the images stuck in the mind quite effortlessly” particularly one about a “leading politician”.

Mr Courtney had to pause mid-speech due to audience laughter when he said: “Inside the walls of the Oireachtas the Government has a monopoly on time. Stephen Donnelly [Ind TD]cannot investigate [Minister for Justice] Alan Shatter’s investigation into Alan Shatter. He’s not able. Alan Shatter goes into the bathroom, looks himself in the mirror and says: ‘Alan have you done anything wrong?’, ‘No I haven’t done anything wrong’. Alan comes back out and announces to the Dail, there is no need for an investigation.”

“Irish ministers are above all else local politicians who are at the mercy of their own constituents. And unless they achieve and retain local superstardom they are vulnerable,” Mr Courtney said.

Local politics was at the core of many arguments put forward by proposition teams. “Democracy by its nature excludes the will of the minority but the Irish political system responds to the needs of local people,” Rebecca Keating of TCD Law said.

“We need people like Jackie Healy-Rae to act as a counterweight to Dublin-centric politics and make people feel they are enfranchised,” Michelle Coyle of UCC Philosoph said.

Counteracting this argument was Kieran O’Sullivan of Sadsi. “When proposition say the system is representative”, they ignore “the travellers who will die early, the unemployed youths who emigrate, the prisoners who slop out,” he continues listing over a dozen minority groups.

“They would have us ignore all of these people and more because the failure of our system is not apparent to white Irish middle class people. The lucky people like us,” he said.

“The home team” was “ entitled to win the competition….this means of course that Ken Murphy was like the local TD,” Mr Justice Hardiman joked of fellow adjudicator, the director general of the Law Society.

Ms O’Gorman of Sadsi, said the proposition had argued the country was well-served as “we are no longer at war”. “If your metric is being not at war...you need to be more ambitious”, she said.

Earlier individual speaker Salma Bedair of the Cadet School, dressed in uniform, said “winning the peace has always been our biggest challenge, but achievement”.

Ireland’s World War II policy of neutrality put the “people first”. “Our policy was neutrality and to this day it remains neutrality, lucky for me,” she quipped.

Next month the winners will go to the United States for a three week debating tour of universities.