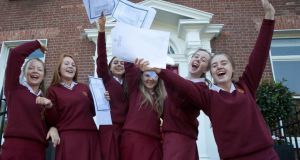 Statistics released by the State Examinations Commission show that a higher proportion of girls than boys took higher level maths last year with 55.1 per cent of female students opting to take the higher level paper.

This constituted a 1.94 percentage point increase in the number of girls taking maths at honours level, with a correlating drop in the proportion of female students taking ordinary level and foundation level maths this year compared with last year (down by 1.58 percentage points and 0.36 percentage points respectively).

The figures feed into an overall trend which has seen an increasing number of students taking higher-level maths over the past number of years.

In 2012, 48 per cent of Junior Certificate students took maths at honours level, rising to 51.6 per cent last year, and increasing again to 53.7 per cent in 2014, an upward trend which has been attributed to the introduction of project maths.

A drop in students achieving an A grade in higher level maths occurred among both sexes: 10.6 per cent of girls and 10.8 per cent of boys achieved the top grade at higher level this year compared to 11.1 per cent and 12.8 per cent respectively last year.

Just under three-quarters (74.9 per cent) of girls taking the higher level paper achieved an A, B or C grade compared to 71.2 per cent of boys.

The percentage of students of both sexes who failed the higher level paper also increased this year: 2.6 per cent of girls failed the paper in 2013, rising to a 3.6 per cent failure rate in 2014, while among male students the level of failure grades increased from 3.9 per cent to 5.4 per cent.

Girls taking the higher level English paper were more likely than their male counterparts to secure an A grade, with 12.4 per cent of girls achieving the top grade compared with just 6.9 per cent of boys.

More than four in five girls (82.5 per cent) achieved an A, B or C grade in the higher level English exam compared to 68 per cent of boys.