The sad story of Ann Lovett 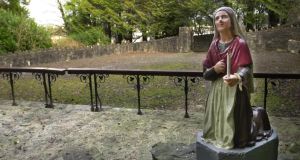 In 1984, Ann Lovett, a 15-year-old girl, died alone after giving birth beside a Marian grotto in Co Longford. Her baby son died shortly after. It was said that Ann had managed to conceal her pregnancy from her parents, teachers, and neighbours. There was a sense that, to some extent, a blind eye had been turned to a frightened and pregnant girl. It was also equally clear that this could have happened in almost any town in Ireland, and that a large number of people, including Ann’s teachers, genuinely did not know.

This month marks the 30th anniversary of Ann’s death.

Shame and secrecy were the common responses to pregnancy outside of marriage in Ireland. Women often snuck away to England to have their baby quietly adopted, or to have an abortion. Infanticide was common. Contraception was illegal. There was no sex education in schools.

Ann Lovett’s death, and the death of more babies after that, led to a national debate. Women started to come forward to tell their own stories about their secret or concealed pregnancies.

Meanwhile, Aids was emerging, and people were dying. Revelations of widespread child abuse, throughout all sections of society, were beginning to emerge, and it was clear that children did not have the vocabulary to understand what was, and what was not, an appropriate touch from an adult or an older child.

In 1985, the minister for education, Gemma Hussey (Fine Gael), said that there was a need for a sex education programme in schools. There was strong opposition from religious pressure groups. The Catholic Church said that school sex education must be delivered within the ethos of the school, and the majority of Irish schools were, and remain, Catholic. This model of sex education, where schools can deliver it according to their ethos, was what was eventually adopted and is currently in place in Irish schools.

There was little political will to bring in a national sex education programme. Guidelines issued to post-primary schools by the Department of Education in 1987 recommended that sex and relationship education be integrated into all subjects, and that this education should not be secular. Schools ignored these guidelines almost entirely, and the programme fell by the wayside.

Between 1993 and 1995, four newborn babies, abandoned by their young mothers, were found dead. The then minister for education, Niamh Breathnach, who represented the country’s most liberal political constituency (Dún Laoghaire) moved to act, and a Relationships and Sexuality Education programme was introduced. This included, at primary school level, the Stay Safe Programme, a personal safety programme aimed at preventing child abuse and bullying.

These moves met with fierce opposition. Conservative parents formed the group Patre (Parents and Teachers for Real Education), expressing particular concern about what would happen in primary schools. The group organised seminars throughout the country and co-ordinated a highly effective letter-writing campaign to national media.

The DES, running scared from a formidable lobby group, emphasised the importance of forming a relationships and sexuality education programme in partnership with parents. One member of the RSE Advisory Group claimed that there had been protests and harassment by those who opposed RSE. The same pattern of opposition has been documented in many countries, including Australia and the US.

As a result of this pressure, the emphasis shifted from the RSE as a state initiative which would be on the curriculum of all schools to one which schools could deliver in accordance with their ethos; it remains so to this day.

In 1999, the National Party, led by Nora Bennis, made a complaint to the Garda, alleging that RSE resources were pornographic.

In 2003, the Mother and Child Campaign, which shared an office with Youth Defence, “strongly reject [ED] the view muted by the Crisis Pregnancy Agency that the answer to crisis pregnancy is widespread access to contraception and sex education . . . Educating young people about sex is like giving a child matches to play with it is inevitable that they would want to experiment. Naturally this would lead to countless unplanned pregnancy [sic].”

In the early days of the curriculum, one study noted that, in schools where religious were in positions of leadership, particularly female religious, they were more inclined to be progressive with regards to sex education than religious schools in transition to lay principals.

In 2007, an extensive and detailed report by the Children’s Research Centre at Trinity College Dublin found that, in close to 50 per cent of schools, fifth and sixth years were receiving no sex education, in clear defiance of the DES. The very mention of homosexuality and contraception remained taboo in very many schools.

There were low levels of implementation across the board, and the education of boys was particularly neglected. The Government promised action.

In 2010, another report, this time from the youth group Dáil na nÓg, found that little had changed, and may indeed have worsened, with almost 74 per cent of young people receiving little or no sex education. The Government promised action.