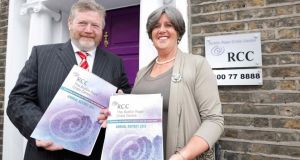 Increasing levels of violence are accompanying rape, the Dublin Rape Crisis Centre has said, and “particularly concerning” was the way social media is being used to film and distribute some assaults.

Angela McCarthy, DRCC’s head of clinical services, speaking at the publication of the centre’s annual report yesterday, said there had been a “disturbing increase in sexual violence” reported last year.

She said 27 per cent of all incidents of adult rape or sexual assault disclosed in therapy sessions included additional violence, predominantly physical abuse, psychological abuse and harassment or intimidation.

Some 21 per cent of all incidents of childhood sexual abuse were accompanied by additional violence, mainly psychological and physical abuse.

“Experienced therapists and counsellors have been very shocked at some of the violence. Age seems to be an issue, with younger people being raped by gangs while others are watching and sometimes filming the assaults.”

Social media was increasingly being used as a second form of abuse, with victims further violated by having a video of the ordeal distributed and potentially witnessed by people who were not present.

“What makes it worse is that we are only seeing the tip of the iceberg. It is particularly concerning.”

IrelandSexual Abuse and Violence in Ireland

The call for “a second Savi” was repeated by chief executive Ellen O’Malley Dunlop, who said helpline staff last year processed the highest number of calls since 2009. There were 3,928 first-time callers and the number of repeat contacts was 4,955 – the highest since 2004 and a 7 per cent increase on 2012. Some 78 per cent were from females and 22 per cent from males.

The busiest month last year was January, when there were 477 calls and the busiest hour on average was between 11am and noon, with more than 800 calls during this hour last year.

Ms O’Malley-Dunlop appealed to him to restore funding to the DRCC which has seen an almost 30 per cent cut since 2008. She said DRCC had to make three people – including two therapists – voluntarily redundant this year just as services were in greater demand than ever.

Pointing to a recent Economic and Social Research Institute study which set out the long-term costs of childhood sexual abuse both to the victims and society, she said: “Many studies around the world tell us that when the emotional and psychological needs are met their physical and overall wellbeing improves which impacts positively on the health and economic wellbeing of that society.”

Mr Reilly said: “I will very happily be an advocate for your service.”

He added that DRCCC was doing “phenomenal work”.

3:30 Cost of Covid-19 to the exchequer is already 'potentially higher' than €8billion