Water meter protesters may face prison for contempt of court 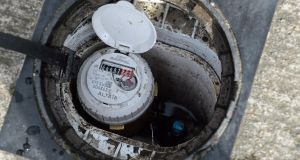 that ‘Unlawful protests’ against the installation of water meters are still taking place in Dublin in breach of injunctions, the High Court heard today. Photograph: Cyril Byrne/The Irish Times

Seven of nine protesters restrained by the High Court from interfering with workmen installing water meters in Dublin may face going to prison on Thursday for contempt of court.

Initially, nine defendants had been named by GMC Sierra Ltd, which is installing the meters on behalf of Bord Gais, in an application to restrain them from assaulting, intimidating or interfering with the workmen.

Mr Justice Patrick McCarthy granted an interim injunction after watching videos of protests and finding that “apparent unlawful conduct” had taken place. He also restrained anyone with knowledge of the making of his order from assaulting, harassing, intimidating, endangering or otherwise unlawfully interfering with or obstructing the workers.

Last week solicitor Conleth Pendrid, for the defendants, had the injunction against his clients lifted on their giving an undertaking to Mr Justice Anthony Barr they would desist from participating in unlawful protests. Judge Barr allowed the part of the injunction restraining unlawful activities by anyone with knowledge of the order to remain in place.

John Berry, counsel for the named protesters, said there was some confusion as to their undertaking and they were not prepared to agree to restraining themselves from unlawfully interfering with or obstructing any person working on behalf of the plaintiff.

Mr O’Callaghan, who appeared with Ailionora McMahon for GMC Sierra, said that if the defendants were not prepared to stand by their undertaking to the court, then Judge McCarthy’s injunction should be reinstated.

Mr Berry said all of the defendants denied they had engaged in unlawful activities and questioned whether what they were doing was unlawful or unconstitutional. He said they maintained they were entitled to conduct their protest by, for instance, peacefully standing on a water cock on a pavement which workmen had to get access to in order to install a meter.

Assaulting, harassing, intimidating or endangering someone were specific offences which, if committed, could be dealt with by the gardai, thereby obviating the necessity for an order directing every citizen to obey the law.

Judge Barrett said he would not impose any injunction on the defendants nor accept any undertaking from them but would put GMC Sierra’s motion for attachment and committal to prison of seven of the nine defendants in the court list for hearing before the duty judge on Thursday.

Up to 30 supporters of the anti-water meter protesters attended court.