Waiter jailed for murder of Irish women in Turkey 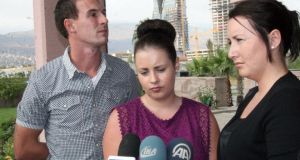 A Turkish waiter has today been jailed for life for the murder of two women from Co Down, but his father was found not guilty.

Recep Cetin (22) showed no emotion as he was found guilty of stabbing Marion Graham and Cathy Dinsmore.

The bodies of the women, both aged 53, were discovered in a secluded woodland on the outskirts of Izmir, south-east Turkey in 2011.

Relatives of the victims, including Shannon Graham, who was the girlfriend of Recep at the time of the killing, attended today’s hearing.

Before sentencing, Recep Cetin pleaded for leniency, repeating earlier claims he was too young young for an adult court and that he hadd acted in self-defence. “I made a mistake. I was a teenager,” he said.

“I feared for my life when they [the victims] attacked me and I did what I did.”

Judges at the Izmir Bayrakli Fifth High Criminal Court rejected his claims and sentenced him to two whole life sentences, to be served in solitary cobnnfinement.

They found his father Eyup Cetin (43) not guilty of aiding and abetting on a 2-1 majority, despite evidence from a secret witness.The chief judge voted to find Eyup Cetin guilty but was overruled by his colleagues’ decisions. The taxi driver left court a free man after more than two years in custody.

He has always denied involvement, despite a witness placing him at the scene of the crime. Before being cleared he accused the witness of bias. “The secret witness is someone hostile to me and my family - someone who wants to harm us.”

“I wish I knew about the murders. It is an unacceptable incident. I am a man almost in his fifties, I am not a child, but in the end, it is up to you to decide on this case.” Mr Eyup refused to comment outside of court,” he said.

The sentencing brings to a close more than two years of court proceedings. The case has been hit by a number of setbacks.

Recep Cetin first claimed he was 17 - which would have seen him tried in a youth court with more lenient sentences. When tests showed he was actually in his twenties, his lawyer claimed he was mentally ill and needed psychological evaluation. The court then ordered the mental health examination to be carried out on his father before realising its mistake.

At the last hearing Recep Cetin admitted his guilt outright and claimed he had killed the women out of ‘love’ because he didn’t want to lose Shannon Graham.

After court, relatives of Recep and Eyup Cetin, who declined to be named, said they accepted the court’s decision. One added: “Justice has been served.”

Sharon Graham, the daughter of Marion Graham made a short statement outside the court. She said the “horrendous” stabbing has torn her family apart.

“I am just satisfied with the result. These murders tore us apart,” she said.

Elsewhere, George Dinsmore, the brother of Ms Dinsmore, said he was “relieved and happy” Recep Cetin had been given the maximum sentence possible.

“The judges have done everything they can do. I wasn’t sure what was going to happen. I am very relieved that we’ve got a verdict and closure,” he said.

“The trial is finally over after two years. We believe the verdict is right and my clients here are satisfied with the verdict. This is the highest sentence Turkish courts can issue on such a crime,” he said.

He said they planned to appeal the release of Eyup Cetin but that it was “not a priority”.

“In the end, we think it has been a fair trial based on all the evidence collected regarding the incident,” he added.

“They will not comment on the release of other defendant but they are satisfied with the sentence issued for Recep and think justice has been served.”