Supreme Court finds in favour of committee over Callely expenses 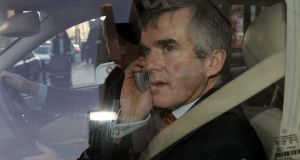 The Supreme Court has ruled the Seanad committee was entitled to find former senator Ivor Callely misrepresented his place of residence for the purpose of claiming expenses. Photograph: David Sleator/The Irish Times

A Seanad committee has won its appeal against a High Court finding in favour of former Senator Ivor Callely over his expenses.

A seven-judge Supreme Court, in a 4-3 decision, ruled the Seanad Committee on Members’ Interests was entitled to conclude Mr Callely had in 2008 misrepresented his normal place of residence as being in Kilcrohane House, Bantry, Cork, rather than Clontarf in Dublin, when claiming expenses.

The appeal arose out of a January 2011 High Court finding that there had been a breach of fair procedures when the Seanad Committee decided in July 2010 that he had deliberately misrepresented his place of residence.

Mr Callely said afterwards that while he was disappointed with the decision, he accepted it and thanked the court and his legal team.

In his action, he had rejected the charge of misrepresentation and said he had complied with Department of Finance definition of place of residence.

A 1938 law on allowances for members of the Oireachtas provided that expenses shall be paid for travel to Dublin from their normal place of residence “for the time being”, the judges said. Mr Callely had argued he relied on a 1994 Department of Finance definition of this as being a place that is “not ad hoc” and not “mere shelter” in a hotel for a few nights such as while attending a conference.

While his house in Cork was not such mere shelter, Mr Justice O’Donnell and Mr Justice Clarke said the committee assessed all the available information which clearly showed Mr Callely had a closer connection to his residence in Clontarf rather than Cork.

While it was true the committee did not frankly acknowledge Mr Callely was in compliance with the Department of Finance interpretation, whether it was because of a desire to avoid public attention of the Oireachtas expenses regime or otherwise, the question the court had to consider was one of law.

In their view, the judges said, the committee was correct in rejecting the 1994 interpretation and entitled to conclude he had misrepresented his normal place of residence.

The judges also said they did not consider there was any unfairness in the procedures adopted by the Committee at its hearings. They noted Mr Callelly did not complain at the time and was “obviously comfortable” with the procedures.

The majority judges also concluded the Constitution did not contemplate that decisions of the Oireachtas relating to disciplining of their own members would be subject to judicial review. These decisions were non-justiciable in accordance with Article 15.10 of the Constitution relating to separation of powers between organs of the State, they said.

This does not mean the proceedings of the Oireachtas are immune from scrutiny or that its members lose their constitutional rights, they said. It is the function of the courts to determine the proper boundaries of the exercise of legislative power in each case which requires that such matters be non-justiciable, they said.

In his concurring judgment, Mr Justice Nial Fennelly said that by using the Department of Finance’s “technical definition” of place of residence, Mr Callelly was claiming travel and overnight expenses which he was not in fact incurring. This was the reason he was found to be in breach of standards in public office legislation, he said.

In his separate dissenting judgment, Mr Justice William McKechnie said, despite accepting Mr Callelly’s expenses fell within the Department of Finance definition, the committee had still asserted this was outside the scope of statutory provisions and his activities had brought the office of Senator into disrepute.

Given that concession (in relation to the definition), any finding he had misrepresented his normal place of residence could not stand as it would constitute a grave departure from the most basic norms of fair procedures, he said.

Mr Justice McKechnie said the argument the Oireachtas had immunity from review by the courts came from a privilege conferred by the British parliamentary system but the 1937 Constitution represented a “clear and definitive break” from that privilege. That privilge was not, as the Committee argued, continued by Article 15.10, he said.

Mr Justice Adrian Hardiman, who described Mr Callely as a man “at the nadir of his fortunes” whose reputation and good name had been destroyed, was as much entitled to justice as any other citizen. The Constitution would be subverted if legislators could, by conferring a particular function of an Oireachtas committee, create “total immunity” in the discharge of an adjudicative function, he said.

He was “astonished” the committee sought to stand over their finding “in the teeth” of its own “very late” admission Mr Callely’s expenses claim came within the Department of Finance interpretation of place of residence. This was “a blatant moving of the goalposts erected in the first place by the committee itself”.

Mr Justice John Murray, in a separate judgment, concurred with the dissenting judgments in relation to there being no immunity from judicial review and because fair procedures were breached by the committee.