Robert Corbet gets life for murder of Aoife Phelan 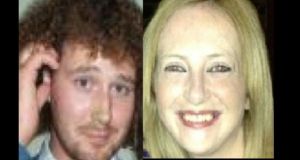 Isobel Kennedy SC said of Robert Corbet: “This was a man entirely in control. His acts were deliberate and calculated”

A Laois man has been sentenced to life in prison for the murder of 30-year-old nanny Aoife Phelan in 2012.

Robert Corbet (25) of Capoley, Sheffield Cross, Portlaoise had pleaded not guilty to murdering the Ballyroan native in his garage. However the haulier admitted her manslaughter between October 25th and November 7th, when her body was found in a barrel, buried 10 feet below ground behind his home.

His Central Criminal Court trial heard they had met a few months earlier and she had soon told him that she was pregnant with his child.

The jury saw transcripts of some of the thousands of phone messages between them. Some of these referred to the pregnancy and in one he suggested a name for the baby.

Mr Corbet testified that he had his doubts about the pregnancy because he had no medical proof. He said he questioned her about it on the evening of October 25th while they were in his shed.

He said she threatened to ruin his life, business and reputation if he didn’t face up to it and that these threats caused him to snap, see red and lose self control. He said he caught her around the neck, they fell, he released his grip, struck her over the back of the head and resumed strangling her.

He said she was motionless by the time he covered her head with a plastic bag and tightened two cable ties around her neck. He told gardai he had done this to make sure she was dead.

He then put her body in a barrel, sealed it and mopped up blood before washing his hands and driving to Dublin airport to collect a friend. He returned home later that night, watched television and went to bed, the barrel containing her body still in the shed.

He said he rolled that barrel into a pit on his property the following morning and the jury was shown CCTV footage from his haulage yard.

It showed a van reversing out of shot, into the area where Ms Phelan’s body was found. The same van was seen driving back into shot with its rear doors open.

More footage showed a truck reversing to the same area and emptying a load of filling gravel, and a forklift containing building material was seen moving in that direction later.

Mr Corbet admitted that he had asked unsuspecting friends to fill in the pit. They testified he had told them to be careful not to burst the barrel in the bottom of the pit as it was full of oil and he did not want to contaminate the water table.

Mr Corbet then flew to New York to visit his former girlfriend as planned. He agreed with gardai that Ms Phelan had been a complication and barrier to him getting back together with her.

Ms Phelan’s parents reported her missing that day and gardai contacted Mr Corbet in New York. He denied involvement while there and on his return. He made admissions only after detectives put his phone records to him.

He continued to lie though, telling them that he had killed her in his jeep and dumped her body in a river. He finally told the truth after they excavated the crime scene and found her body doubled over in the barrel. He said he had lied about the location of the body in order to protect his mother’s home.

A post-mortem exam showed that Ms Phelan died of asphyxia due to strangulation, with blunt force trauma a contributory factor. She was not pregnant.

The defence had asked for a verdict of manslaughter by reason of provocation arising out of Ms Phelan’s alleged threats and asked the jury to ignore the desecration of her body.

However the jury agreed with the prosecution that there was no provocation. The State had described what he did as deliberate and calculated.

The nine men and three women reached a majority guilty verdict of ten to two, after four and a half hours of deliberations.

Corbet became emotional and put his head in his hands after the verdict was read out.

The victim’s brother, Daire Phelan, entered the witness box and delivered a victim impact statement on behalf of her parents, five brothers and six sisters.

Her mother, Betty, described her daughter as beautiful and vibrant. She described the 13 days that she was missing as the darkest of her life.

She said she did not recognise her daughter when she went to the hospital to identify her, as her face was black and blue. She explained that she had to have a closed casket at her funeral.

“Thank you for those 30 years, Aoife,” she concluded.

Ms Phelan’s father, Michael, recalled his daughter’s last words to him a few days before she went missing: “I’ll see you at the weekend, father.”

He said that he often had to drive by Sheffield Cross, which now always caused his heart to race and his legs to shake. He said the proudest day of a father’s life was to walk his daughter down the aisle, but he said this day had been taken from him.

Mr Justice Garrett Sheehan imposed the mandatory life sentence on Corbet, who had no previous convictions.

The Phelan family left the courthouse without comment as Corbet was led away to begin his life sentence.

1 Lithuanian man given until midnight on Saturday to leave Ireland
2 Coronavirus in Europe: Two dead in Italy as fears grow that attempts to contain illness are failing
3 Ryanair’s Michael O’Leary under fire for comments on Muslim men
4 Archbishop: Sex abuse of women by L’Arche founder ‘reprehensible’
5 The view from Clondalkin: If Sinn Féin don’t get in, ‘there will be marches’
Real news has value SUBSCRIBE