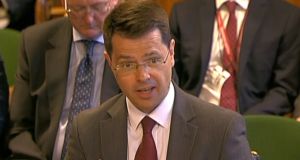 James Brokenshire is the fourth Northern Ireland secretary of state that the Ballymurphy relatives have met. Photograph: PA

Relatives of those killed by British soldiers in Ballymurphy more than 40 years ago have cut short a “terrible” meeting with the new Secretary of State.

They walked out after just 45 minutes with James Brokenshire at Stormont House in a row over the release of funding for Troubles-related inquests.

John Teggart, whose father was among 10 people shot dead in August 1971, said they were “disappointed and depressed” by the Minister’s attitude.

He said: “It was a terrible meeting. James Brokenshire refused to answer many of our questions and it was just going round and round in circles.”

Mr Teggart said the relatives had been encouraged by some recent statements from the Minister, who was appointed in July.

But he added: “It was just the same old, same old. The families poured their hearts out about what had happened to their late relatives and were basically pleading for him to release the funding but it was going nowhere.

“Mr Brokenshire is now the fourth Secretary of State that we have met.

“He said he could not release the funding because he did not see support from the Executive for that. But we had representatives from six parties in the room.

“The only party that wasn’t there was the DUP.”

A Catholic priest and a mother of eight were among those gunned down during three days of gunfire involving members of the Parachute Regiment in Ballymurphy in August 1971. Another man died of a heart attack following an alleged violent confrontation with the troops in the west Belfast estate.

His request for £10 million (€11.6 million) to fund a five-year programme that would deal with controversial Troubles’ deaths was blocked by First Minister Arlene Foster.

Outstanding inquests into more than 80 deaths that took place during the 30-year conflict have yet to be heard.

She said: “The Ballymurphy families have been waiting 45 years for justice and once again they have been let down . . . The British government has failed to uphold commitments made in the Stormont House Agreement on how to deal with the legacy of the conflict.

“This is the fourth British secretary of state the families have met and their inaction has only added to the hurt of the families over four decades.”

He said: “They are right to be angry and right to let the Secretary of State know of their anger in unambiguous terms.

“The Secretary of State has been meeting with victims and survivors. One of the outcomes should be that the London government changes for the better its approach to legacy issues. Today, the Ballymurphy families heard that despite meeting victims and survivors, the London Government and the Secretary of State have yet to demonstrate change in their thinking.

“They gave the families no hope that inquest funds – which the Lord Chief Justice has asked for time and time again – will be released now.”

Mr Attwood alleged that the DUP have been given a “veto” on legacy issues.