Republican claims he has been wrongly blamed for 1998 Omagh bomb 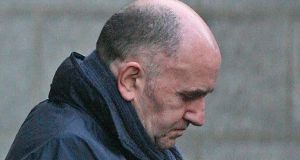 A 2008 file photograph of Real IRA leader Michael McKevitt, who has been released from prison after serving a sentence for directing terrorism. Photograph: Niall Carson/PA Wire.

Real IRA leader Michael McKevitt has been released from prison after completing a sentence for directing terrorism.

McKevitt, who is battling cancer, was temporarily released late last year but his release became formal on Easter Sunday with the expiry of his sentence.

In a statement to The Irish Times, he claimed he was framed and wrongly blamed for the Omagh bomb, which he denies any involvement in.

McKevitt was one of four men found liable for the 1998 bombing in a civil action taken by relatives of the dead.

He was jailed by the non-jury Special Criminal Court for 20 years in 2003, backdated to 2001, for directing terrorism and for membership of an illegal organisation styling itself as the Real IRA.

McKevitt had a cancerous kidney removed last May and was returned to jail five and a half weeks later. He and his family objected to his return to jail and the decision to cancel phased temporary releases long term prisoners are entitled to.

The Government back tracked last year and reinstated the planned series of temporary releases, the first of which he enjoyed in late July. After a series of short releases and being returned to Portlaoise Prison, he was granted open ended temporary release last year as his health failed. He has remained at his home in Co Louth since then but his sentence formally ended on Sunday and he is now at liberty.

McKevitt denied involved in the Omagh bomb which he said was one of the worst atrocities linked to The Troubles.

“Firstly, let me state categorically, that I had no involvement in the bombing whatsoever,” he said. “I was stitched-up from the outset. I have no doubt that both the Irish and British authorities and others, including some within media circles are aware of this fact also.

“Within days of the bombing, I said that I had no hand, act or part in the bombing and that remains my position.

“In my opinion, Omagh is up there with some of the worst tragedies of the conflict - on a scale with the Dundalk/Monaghan/Dublin bombings, Bloody Sunday and the Ballymurphy massacre.”

McKevitt said the interesting link between all of those events was the fact that “no-one was held accountable and repeated calls for independent inquires have consistently been opposed” by both governments.

“Why is it that despite all the conflicting evidence, including evidence supporting the existence of participating state agents, calls from families of the dead and even some of those accussed - is there still no appetite for the British or Irish authorities to support an independent inquiry into Omagh?

“Successive British and Irish governments have attempted to buy the silence of some of the bereaved families by sponsoring flawed civil legal actions against some of the accused.

“The civil cases have been ongoing for years, ironically against a backdrop of criminal proceedings being dismissed and overturned against some of those accused, as a result of flawed charges, lack of proven evidence, missing police files and even some of the investigating police fabricating crucial evidence.”

McKevitt said an “unprecedented media campaign” was waged against him and his family in the aftermath of the Omagh bombing, and he alleged the reports linking him to the bombing “were emanating from senior sources within the British establishment”.

“The source of the media briefings was subsequently identified when Alastair Campbell, chief spin doctor for the British government at that time, published his book The Irish Diaries in 2013.

“In it, Campbell refers to the aftermath of the bombing when (Tony) Blair insisted that Campbell take control of the media briefings. Campbell, as Tony Blair’s right-hand man, had a political agenda not only to see the Good Friday Agreement through to fruitition but most importantly, he was a key strategist tasked with discrediting republican opposition to the agreement.

“Coincidently, Campbell has been consistently accused by the British media, including The Guardian newspaper, of colluding with others to alter British intelligence dossiers prior to the invasion of Iraq, claiming Iraq had weapons of mass destruction. The subsequent Iraqi war, which was triggered by the misleading intelligence reports, resulted in the deaths of over one million people.”

McKevitt also said his political views had not changed.

“I have consistently maintained one view throughout my adult life: that the British presence in Ireland is illegitimate and has been the most significant contributing factor to years of conflict and strife in Ireland and beyond.”