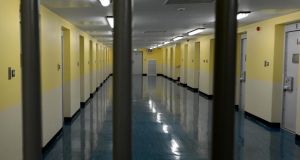 Prison officers at two of the State’s largest prisons are due to begin work stoppages later this month in a dispute over staffing levels.

The Irish Prison Service said it was disappointed about the proposed course of action announced by the association.

“The course of action proposes to breach the terms of the public service agreements which set out, initially in the Croke Park Agreement, that strikes or other forms of industrial action by trade unions, employees or employers were precluded and this later being reaffirmed in the Haddington Road Agreement,” a spokesman said.