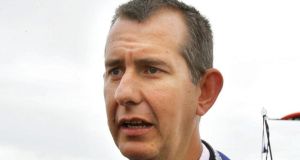 Senior judges in Northern Ireland were told former minister for health Edwin Poots (above) acted irrationally in maintaining the prohibition on blood donations from gay men, because the threat of blood contamination was “infinitesimal”. File photograph: Kate Geraghty/The Irish Times

Lifting the lifetime ban on gay men giving blood in Northern Ireland would increase the risk of a contaminated donation getting through just once every 15,000 years, the Court of Appeal heard on Thursday.

Senior judges were told former minister for health Edwin Poots acted irrationally in maintaining the prohibition, because the threat was “infinitesimal”.

Lawyers for a homosexual man at the centre of the legal battle also claimed Mr Poots’s decision was a “knee-jerk reaction” which went against the advice of his officials and experts.

Attempts are being made to overturn a finding that the Democratic Unionist MLA did not have power to keep in place the lifetime ban on donations from homosexual men. The High Court ruled that his decision was “infected” with apparent bias.

Mr Poots was also held to have breached the ministerial code by failing to bring the issue before the Stormont Executive, and to have been seemingly influenced by his Christian beliefs in maintaining the blanket ban.

In 2011 the prohibition on donations from gay men, put in place in the 1980s amid fears of Aids, was lifted in England, Scotland and Wales following recommendations by the advisory committee on the Safety of Blood, Tissues and Organs (SaBTO).

It was replaced by new rules which allow blood from men whose last sexual contact with a man was more than a year ago.

Mr Poots maintained the ban in Northern Ireland on the basis of ensuring public safety.

The findings against him were made in a legal action taken by a homosexual man granted anonymity in the case and referred to as JR65.

Challenges to the verdict have been continued by Mr Poots’s DUP ministerial successors and the British health secretary Jeremy Hunt.

A panel of three appeal judges are examining issues on whether authority for blood policy is a devolved matter.

Responding for JR65 today, David Scoffield QC claimed the former minister’s decision was so disproportionate as to be unreasonable.

Based on medical evidence, he argued, introducing a one-year deferral period could actually lead to enhanced compliance and increased safety.

It was contended that Mr Poots’s concerns centred on a finding that, if the deferral period was brought in, the threat of contaminated blood getting into the supplies would increase by one in every billion donations.

“In Northern Ireland, where there are only around 64,000 donations per year, that’s a risk of an infectious donation being realised about every 15,000 years,” Mr Scoffield said.