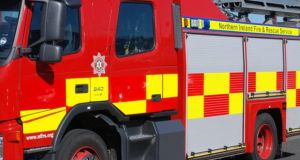 Fire was reported to emergency services shortly after 11pm yesterday.

A woman’s body has been found following a suspicious house fire in Newry last night.

Police said they are investigating the fire, at Georges Lane in the city. It was reported to them just after 11pm last night.

The woman’s body was found inside the house. No details about her have been released.

Police have appealed for anyone who noticed any suspicious activity in the area, or who has any information, to contact them on 0845 600 8000.

Coronavirus: No new deaths and 11 further cases reported 18:00
Racism towards Travellers is ‘normalised’ in Ireland, says senator 17:46
Croke Park opens up pitch for Muslim prayer service 17:31
Covid-19: Calls for flights from the US to be suspended from opposition parties 16:57
Teen arrested over fatal hit-and-run in Co Tipperary 16:41

1 ‘I thought it was a hoax’: Patient dies after Texas Covid party
2 Johnny Depp tells court Amber Heard threw ‘haymaker’ punch at him
3 US passengers fly into Dublin: ‘I’m here for six days. I guess I’ll have to stay inside’
4 Maureen Dowd: Biden has his limitations but he’s no Trump
5 Immunity to Covid-19 could be lost in months, study suggests
Real news has value SUBSCRIBE