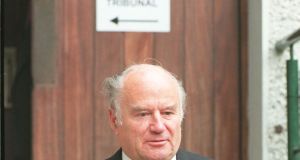 The planning tribunal, in its heyday, was box office. For years, nightly news led with the latest from Dublin Castle, where the public gallery was regularly packed to capacity. Evidence was re-enacted on the radio and as cabaret theatre.

In 2002, ordinary citizens queued around the block when the chairman, Mr Justice Feargus Flood, published his damning report on the payments made to former Fianna Fáil minister Ray Burke.

Flood retired and the tribunal moved on to other things – mostly involving Frank Dunlop or Bertie Ahern. Burke and the businessmen who bribed him were told to pay their own legal costs, although the criminal proceedings expected by some never materialised. The tribunal, now chaired by Mr Justice Alan Mahon, completed its hearings and published a final report in 2012.

End of story, or so it seemed, with only the substantial legal costs of hundreds of witnesses remaining to be paid. Yet, this turned out to be far from the end of the tale for a tribunal that always had the whiff of controversy about it.

Years after the hearings into Burke and former planning official George Redmond, a succession of legal challenges has unpicked its work to such an extent that those early years now seem largely to have been a waste of time.

So how did it come to this? How did a tribunal with a massive budget, widespread public support and copious material to investigate end up falling flat on its face? Whose fault is it and who should foot the bill?

While this unravelling of the tribunal stems from legal actions taken by witnesses, the judiciary has long had its doubts about the tribunal process, and the planning tribunal in particular.

As far back as 1999, a High Court judge was describing the tribunal’s powers to make orders as “draconian”. A former taxing master in the court called tribunals “the Frankenstein of modern Irish society”.

Mr Justice Adrian Hardiman of the Supreme Court, one of the tribunal’s chief critics over many years, complained about the “grotesque” cost of tribunals and their duration, which he characterised as “nothing less than appalling”.

For many years, the tribunal enjoyed the protection conferred by widespread public and political support, but, as the years passed and the bills mounted, disillusionment set in and the courts began to look critically at its workings.

The start of the unravelling can be traced back to a seemingly innocuous ruling made by Mr Justice Flood in January 1999. In it, he ruled that he would only circulate documents to other parties when he found them to be relevant to an issue. Fast forward to 2005, when property developer Owen O’Callaghan won a legal battle against the tribunal for access to the unedited versions of documents held by the inquiry.

As far as O’Callaghan was concerned, the missing bits were very relevant; his lawyers claimed the tribunal concealed parts of the documents containing “wild” allegations against him by whistleblower Tom Gilmartin.

In Murphy’s case, the whistleblower on which the tribunal based this finding was James Gogarty, the original “star witness” in Dublin Castle. The octogenarian former boss of Murphy’s company, best known for his, “Will we get a receipt? Will we fuck” line, died in 2005.

In 2010, the Supreme Court ruled in favour of Murphy and a colleague, Frank Reynolds. The court said it was a “cause of concern” that Mr Justice Flood had edited Gogarty’s interviews and statements in a manner which cut out serious allegations against at least four prominent people.

Mr Justice Hardiman, now in the Supreme Court, linked the concealment of this potentially “explosive” material to the credibility of Gogarty. Effectively, he was asking whether Gogarty was to be believed on his main allegations if he was making these other, seemingly implausible, allegations.

Murphy’s litigation was aimed only at securing his legal costs, which were duly awarded. The court also quashed the finding of hindering and obstructing on the basis that this was a criminal offence which only the courts could decide. The Murphy ruling blew a hole in the tribunal’s defence of its procedures and others were happy to march through that hole.

Redmond, whose own action had stalled for want of resources and confidence about winning, revived his case. The tribunal threw in the towel and Redmond, once an avid tennis player, won game, set and match when his case was settled just before Christmas.

Now the tribunal, having studied the Murphy judgment, not only withdrew the hindering and obstruction findings against Redmond and awarded him his costs, but it also undertook to withdraw all findings of corruption.

Redmond was in the clear, and it followed that the findings against others mentioned in the tribunal report on him – Murphy, Reynolds and builder Michael Bailey – would also have to be dropped.

On the basis of this comment, the tribunal has no choice but to redact the second interim report by removing the hindering and obstruction findings against Burke and the businessmen who made payments to him. It may well go further and remove all corruption findings contained in the report.

Mr Justice Mahon says the final cost of the tribunal will be less than €159 million, considerably less than previous estimates. It is also true that the matters uncovered by the inquiry led to Revenue investigations that netted the Exchequer large sums of money in tax settlements.

Yet, the failure of the inquiry to make its findings watertight and the lack of any substantial follow-up to its reports, are causes for concern. Set up to allay public cynicism about corruption in the planning process, the tribunal has added to that disillusionment.

Just as it was said about the beef tribunal that the only person threatened with jail was the journalist who revealed the scandal, one of the few parties at the planning tribunal left to pay its own legal bills is this newspaper, which published the revelations about Ahern’s finances that led to him being investigated publicly by the tribunal.