New laws on rights of crime victims are criticised

Legislation is designed to recognise and safeguard victims, witnesses and families 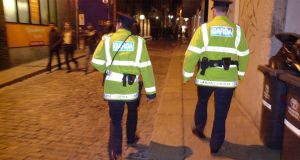 File photograph of gardaí on patrol.

Concerns have been raised around aspects of a comprehensive set of laws on the rights of victims of crime which come into force today.

The new measures include the right to access information on the progress of criminal cases; support during trials; a formal explanation from the Director of Public Prosecutions (DPP) where it is decided not to prosecute offences; and a statutory provision of counselling and support services.

They are designed to recognise and safeguard victims, witnesses and families in a legal process long criticised for ignoring or underplaying their needs.

While now officially in force through the compulsory EU Victims Directive – approved in the European Parliament with an overwhelming majority in October 2012 – supportive Irish legislation is still at a draft stage with no deadline for enactment.

Concerns have also been expressed as to how various measures will work in practice.

Some of these surround the DPP’s obligation to provide reasons for non-prosecution.

Since 2008 the DPP has adopted a policy of providing guidance to families and victims in cases regarding fatalities.

However from today it must do the same for all crimes when requested, right down to District Court level prosecutions, a move that will bring considerable transparency to prosecutorial approaches.

“It is difficult at this point in time to gauge the volume of requests for reasons for decisions not to prosecute, and requests for reviews of decisions, that might be received,” he said.

Some lawyers are concerned it will precipitate an increase in prosecutions even in cases where prosecutors are aware the chance of success is slim.

“You don’t always know what has prompted a decision not to prosecute. By and large the decisions are not particularly surprising,” said one legal source requesting anonymity.

“It might result in the DPP prosecuting cases they may not have otherwise out of concern not to offend victims.”

However a spokeswoman for the DPP said the office “will continue to apply our general guidelines for prosecutors in deciding whether or not to prosecute in all cases”.