Ana Hick (18) collapsed outside the Twisted Pepper nightclub in 2015 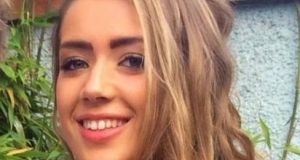 The mother of a teenage girl who died after taking ecstasy thanked her friends for their bravery in “spreading awareness for the greater good”.

Elga Hick, mother of Ana Hick (18), who collapsed outside a Dublin nightclub and died due to the toxic effects of MDMA, called on young people to value their lives and be aware of the dangers of drugs.

“You are special, there is only one of you in the world, you cannot be replaced. Value your life, be aware,” Ms Hick said.

An inquest into her death heard that Ana had gone with friends to see the DJ Hannah Wants at the nightclub on May 15th, 2015. Friends described Ana as someone who was “always up for fun”.

“She was a good friend, always there when you needed her, the perfect person to go to when you were sad,” a friend told Dublin Coroner’s Court.

Ana went for dinner at a friend’s house in Blackrock before taking the Dart to Connolly Station. They went to a “pre-drinks party” at a city-centre apartment before going to the club. Ana had decided not to drink, which a friend understood to mean she was going to take ecstasy instead.

The friend said she knew of only one other occasion when Ana had taken the drug. The court heard that Ana met her boyfriend in the club and he was seen taking a clear plastic bag with a number of pills in it from his jeans pocket. He was immediately pushed out the side door of the nightclub by bouncers.

Later, he came back into the club and the night was going well, according to friends. Ana was in good form, “she was on a good buzz”, having fun and dancing with friends. A friend asked had she taken a pill, she replied yes, one.

Later in the night she became unwell.

“She seemed okay, but as time went on she got worse. It was really hot in there,” the friend said. Ana’s balance deteriorated, she was leaning against her boyfriend and using a CD to fan herself. Her friend said she knew at this stage she had taken more ecstasy. “She was standing, but she was out of it,” the friend said.

Witness Clodagh Cullen, who did not know Ana personally, said she was sitting outside when Ana stumbled out of the club and fell against her. At 3am her friends became aware Ana was outside the club.

“She was being held up, she was out of it, she couldn’t stand up,” a friend told the court. Outside, friends said that Ana had taken three ecstasy pills.

Bouncer Sue Campbell went to her aid. She said Ana was being held up by two boys, her legs were shaking, she was not able to stand and her body looked limp. “I asked did she want an ambulance and she jumped off the ground like Lazarus. I got a fright,” Ms Campbell said.

An ambulance was called at 3.03am and paramedics carried out CPR at the scene. Ana’s pulse was re-established at 3.19am. She had a temperature of 39 degrees (102F) on the way to hospital, according to paramedic Ross McCob.

Ana was pronounced dead the following day, May 17th, shortly after 5pm. She died due to the toxic effects of MDMA, also known as ecstasy, according to Pathologist Dr Niall Mulligan.

Documented evidence shows the average lethal level of MDMA among previously reported deaths is 1.6 micrograms. Ana had 1.8 micrograms of the drug in her system on arrival at the Mater Hospital. The drug, a stimulant, causes core body temperature to rise and stimulates the heart and brain.

“The drug stimulates the heart to such a level that it may not function properly, it may stop,” Dr Mulligan said.

Coroner Dr Myra Cullinane recorded a verdict of death by misadventure, noting the risks young people take in such circumstances and the tragedy for those left behind.

The inquest previously heard that a file was submitted to the Director of Public Prosecutions and no charges were brought in relation to Ana’s death.