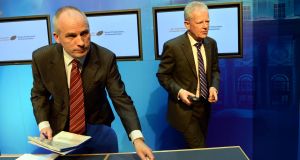 Three mobile phone companies have been fined a total of €33,000 for making unsolicited marketing contact with customers by email, text and phone.

Meteor, Eircom, Vodafone and 02 were all before the Dublin District Court in prosecutions taken by the Data Protection Commissioner. All pleaded guilty to the charges and all except 02 had convictions recorded.

Eircom was fined €1,500 on each of two charges - one in relation to making an unsolicited marketing phone call to a number where the customer was on the national opt-out register for receiving such calls.

The second charge related to a call made to a former customer who had told Eircom he no longer wanted to receive such calls.

Meteor was fined €3,000 on each of three charges of sending unsolicited marketing text messages.

Giving evidence, assistant data protection commissioner Tony Delaney told the court that what was “particularly egregious” about the Meteor offences was that one of them had occurred on December 4th last year - the day after the company had appeared in court on a similar charge.

In that case, Meteor was asked to pay €5,000 to Temple Street Children’s Hospital and was given the benefit of the Probation Act.

Today in court, Vodafone pleaded guilty to 11 charges, including to one involving making a marketing phonecall to a customer on his mobile number.

During the course of the investigation of the complaint it had emerged that the call was part of a campaign which, in error, targeted 2,336 customers who had previously opted out of receiving marketing phone calls from Vodafone.

The company had previously reached a settlement with the Data Protection Commissioner involving a payment of €40,000 to charity. Mr Delaney told the court his office believed it would not get any more such complaints but that had not been the case.

Vodafone also faced three charges of making three marketing phone calls to another individual who had previously opted out of such calls.

It faced five similar charges relating to calls made to another individual’s mobile phone.

The last two charges related to unsolicited marketing text messages sent to the mobile phone of an individual who was not on the Vodafone network. The court heard the man had a Vodafone landline and broadband and had only given the company his mobile number in order to arrange repairs to his landline.

The company had, without his consent, added his mobile number to a marketing database.

Judge John O’Neill fined the company €3,000 on each of seven of the 11 charges. In the other four cases, he asked that Vodafone pay €3,000 each to four charities by December 17th and he would then strike out the charges.

In the event the company failed to do this, he would impose fines of €3,500 on ea ch of those four charges.

Telefonica Ireland Ltd (trading as 02) pleaded guilty to three charges - one of sending an unsolicited marketing email and two of sending unsolicited texts.

During the investigation of these complaints it emerged that as a result of human error one of the marketing text message was sent by 02 to 78,366 phone subscribers who had opted out of receiving marketing messages from O2. Two customers complained to the Data Protection Commissioner and their complaints were the subject of the two charges.

Counsel for 02 told the court that since the breach, the company had made “very real and significant efforts” at considerable cost to make sure such incidents did not occur again. This included using the services of a data protection consultant and special data protection training for staff.

Judge O’Neill asked that 02 pay €2,000 to each of three charities by December 17th and said he would strike out the charges if this were done.

Speaking after the cases, Mr Delaney said his office was “very satisfied with the outcome”.

“The scale of fines imposed today demonstrates that the court views such marketing offences as very serious matters, as the DPC does. It sends out a strong message to all businesses who engage in electronic marketing that breaches of the regulations will be prosecuted by the DPC and will be punished by the courts.”