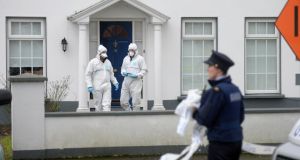 The house in Beechpark Avenue in Castleknock, Dublin where a man’s body was found early this morning. Photograph: Dara Mac Dónaill/The Irish Times

Gardaí are questioning a suspect after a man was beaten and stabbed to death in a house in west Dublin in the early hours of this morning.

Tom O’Gorman, a minister of the Eucharist who was involved in a number of Catholic groups and campaigns, was attacked at his home in Castleknock, west Dublin, in the early hours of this morning.

He is believed to have lost his life in a dispute over a game of chess.

The fatal attack occurred at a house on Beech Park Avenue, Castleknock, just before 2am.

Gardaí responded to a 999 call and when they reached the house, a large detached property in a middle-class area of the west Dublin suburb, they found the victim. It is understood he had received stab wounds and had been assaulted.

The man who raised the alarm was still at the house when gardai arrived.

The suspect, a 34-year-old Italian national from Palermo in Sicily, was arrested at the scene and taken to Blanchardstown garda station.

Gardaí believe he was the only person in the house when the deceased was fatally attacked at 1.50am.

He was arrested at the scene under Section 4 of the Criminal Justice Act, allowing for his detention for up to 24 hours without charge. He is being questioned at nearby Blanchardstown Garda station.

The property where he was murdered was Mr O’Gorman’s childhood family home. He had continued to live there since the death of his mother in 2012.

His father, who had worked as a vet, is also deceased.

He has a sister and brother, neither of whom lives in Dublin.

It is understood he shared the property with a lodger.

The body remained at the scene overnight and underwent a preliminary examination this morning at the scene by State Pathologist Prof Marie Cassidy.

The remains were then removed to the city morgue, in Marino, north Dublin, for a full postmortem.

Mr O’Gorman worked as a researcher for the Iona Institute, a Dublin-based Catholic advocacy group that promotes the place of marriage and religion in society.

The group is headed by well known social commentator David Quinn, who last night expressed the group’s “total shock and deep sorrow” at what he called his colleague’s “terrible and untimely” death.

“Tom was a friend as well as a work colleague to us all,” he said in a statement.

“He was a fond and dear friend and we will all miss him. We extend our deepest commiserations to his family and above all to his sister and brother, Catherine and Paul.”