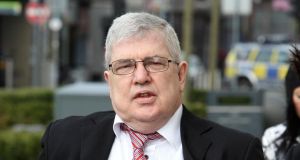 Liam Adams, brother of the Sinn Féin president Gerry Adams, was today sentenced to 16 years in prison for raping and indecently assaulting his daughter Áine when she was aged between four and nine years.

He was sentenced to an additional two years on probation.

Judge Corinne Philpott imposed the sentence on 58-year Adams, from Bernagh Drive in west Belfast, at Laganside Crown Court in Belfast this morning.

Áine Adams, now aged 40, was in court to hear her father being sentenced. She sat in the public gallery with her husband Tony Dahlstrom, her sister Sinead and a police liaison officer.

Liam Adams, wearing a dark jacket and check shirt, stood in the dock as sentence was imposed. He carried a walking stick, as he suffers from arthritis.

He showed no visible sign of remorse as the judge passed sentence, shaking his head occasionally during the hearing and then smiling and laughing as he was led from the dock.

At the start of October a jury of nine men and three women, by an 11 to 1 majority, found Adams guilty of all 10 charges against him - three of rape, three of gross indecency and four of indecent assault. It was alleged the assaults began in 1977 and ended in 1983.

Judge Philpott said the crimes “were the greatest breach of trust imaginable”.

Throughout the trial, Áine Adams simply wanted to hear from Adams that what he did was wrong, she said.

“She now at least knows that the jury found her evidence compelling, as they believed her,” said Judge Philpott.

This trial and an earlier trial of Liam Adams, which collapsed in April, brought a sharp focus onto his brother Gerry.

Police Ombudsman Dr Michael Maguire and Attorney General John Larkin are as a result of the two trials reviewing issues around whether Gerry Adams withheld information about his brother’s sexual assault of Áine Adams.

During both the first and the second, completed, trial it emerged that as far back as 1987 the Sinn Féin president was aware of the abuse allegation against his brother – an allegation Liam Adams denied that same year when confronted by the Sinn Féin leader in Buncrana, Co Donegal.

That case never proceeded because Áine Adams retracted her evidence to the RUC, complaining that some police officers appeared more interested in her uncle Gerry Adams than in her allegations.

In 2006 she repeated the allegations to the PSNI. She said she had always wanted her father to admit the abuse so she could achieve some form of “closure”. She also said she was motivated by a concern for a young daughter Liam Adams had in a second relationship. The trial was told that neither this daughter, nor a second daughter in that second marriage, suffered any abuse from Liam Adams.

In the first trial, which collapsed for legal reasons, Gerry Adams said that during a “walk in the rain” in Dundalk in 2000, Liam Adams admitted to him that on one occasion he had sexually assaulted his daughter, although he denied raping her.

After Áine Adams reactivating her 1987 allegation, in 2006, Gerry Adams went to the police in 2007 to give a statement - but did not tell them about the 2000 admission by his brother.

It wasn’t until 2009 that Gerry Adams told police about Liam Adams’s partial and limited confession.

During the first trial, Liam Adams’s counsel, Eilis McDermott, QC, said the reason he gave the 2009 statement was because he already knew that UTV’s Insight programme was about to run a special show about the abuse.

She said: “You needed to make the statement at that stage because you wanted to do your best to avoid allegations that you had withheld information about child sexual abuse?”

Ms McDermott accused him of acting to save his “political skin”.

Mr Adams strenuously denied this. “I was trying to help a young woman I am very fond of,” he said.

The trials have resulted in considerable political pressure being exerted on Gerry Adams, although he has insisted he always acted in the interests of Aine Adams and that he did nothing wrong.

Some political opponents and commentators have attacked Gerry Adams over how he dealt with the case, with the Sinn Féin leader rejecting “unconditionally” claims he had committed an offence and also complaining of a media “witch hunt”. Mr Adams also disclosed in December 2009 that his father, also called Gerry, emotionally, physically and sexually abused family members over many years.

Woman accused of publishing photos of teenage killers takes court challenge 17:02
Woman jailed for assaulting a family friend who was trying to break up a fight 16:43
Burglar jailed for sexually assaulting woman who awoke with his hand on her throat 16:32
Convicted fraudster surrendered to UK authorities 16:27
Minister criticises ‘whiff of xenophobia’ to some TDs’ comments on quarantining 16:27