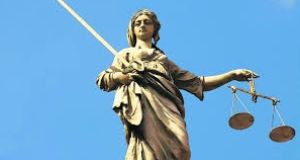 Thirty-four per cent of 825 drug dealers convicted in the courts over the past five years were given a suspended sentence.

It will come as news to many people that the law defines commercial-scale drug dealing as those offences involving consignments of drugs valued at €12,500 or more.

However, while that figure seems a very low threshold to put a convicted drug dealer in line for a mandatory minimum 10-year jail term, most of those prosecuted have been caught with much larger quantities of drugs.

And while many may feel mandatory sentencing is an inflexible system best set aside, the law is clear in what it wants judges to do – jail drug dealers for long periods.

The Misuse of Drugs Act makes it very clear that the mandatory minimum 10-year sentence must apply for those convicted unless there are “exceptional” circumstances.

The Act says the mandatory minimum term is being set down to take account of “the harm caused to society by drug trafficking”.

The legislature would likely not have expected judges to impose the 10-year term in every case, perhaps it would not even have expected the majority of convictions to result in the so-called mandatory minimum term.

But the fact the sentence has only been imposed on 3 per cent of the 825 drug dealers convicted in the courts over the past five years seems unusual.

And that 34 per cent of the cases resulted in a suspended sentence – meaning no jail time, at all – seems incredible.

The structure of most of the organised crime gangs running the Irish illicit trade is such that gang leaders rarely handle drugs themselves.

Couriers are often paid to drive parcels of drugs between locations. But there have also been countless incidents where, if not leading, mid-ranking gang members have been caught in possession.

This is occurring at a much greater frequency than the sentencing data – obtained by Independents 4 Change TD Clare Daly – suggests.

In March 2007, when the legislation was being strengthened, the then minister for justice John O’Donoghue, of Fianna Fáil, said the intentions of the Oireachtas were that it would “be perfectly clear that the mandatory minimum term of ten years must apply in all but the most specific and exceptional cases”.

The Law Reform Commission has since found the provisions to be ineffective and recommended they be replaced.

Judges were “taking a pragmatic approach” in opting out of the so-called mandatory minimum 10-year jail term.

Her organisation believes the courts should use remedies such as drug rehabilitation to break offending behaviour rather than mandatory sentencing, which she terms “a blunt instrument that results in unequal justice”.

“Mandatory sentencing for drug offences in particular has not been effective in addressing the category of crime that it was intended to,” she said.

“They set out to get the big guys and they got the small guys. It certainly looks like the judges are acknowledging the level of criminal before the courts.”

She added when offenders were jailed for periods under mandatory sentencing provisions, they were statute barred from accessing temporary release.

This was having the effect of sabotaging their opportunity at rehabilitation and being eased back into society in a structured way.

“We have met these young men in the prisons,” she said. “They were low-level, first-time offenders when they went in and have done everything they can possibly do in terms of engaging with treatment and education.

“It’s years since they addressed their offending behaviour and they are just sitting there, waiting it out. They can’t get temporary release for weekends or day programmes, unlike other prisoners.

“That’s a huge problem for reintegrating; to be barred by statute from accessing temporary release is regressive.”