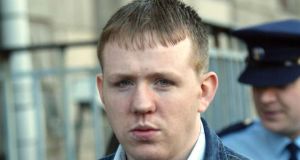 A Limerick man due to go on trial for murder at the Special Criminal Court tomorrow morning was tonight being treated in hospital after going on hunger strike.

John Dundon (29), Hyde Road, Limerick, is charged with the murder of Shane Geoghegan at Dooradoyle, Limerick, in November 2008.

He has been on hunger strike for around one week but it appears he unofficially stopped eating the week before last and had in recent days stopped taking fluids.

Dundon was being housed in the segregation area in Portlaoise Prison and was unresponsive when staff checked him in his cell just after 4pm today. He was taken from the prison by ambulance and was undergoing a medical examination in hospital tonight.

He had recently made efforts in the High Court to have his murder trial deferred until next year.

Dundon’s lawyers claimed they had been “ambushed” saying that gardaí in recent weeks gave them a large volume of material, including CCTV footage and documentation, which they have had insufficient time to analyse in terms of its relevance to his defence.

They claimed Dundon’s right to a fair trial is at risk and the trial should be deferred to 2014.

However, Mr Justice John Hedigan in the High Court last Friday ruled the trial could go ahead.

In his High Court action against the Special Criminal Court, Dundon sought orders and declarations including one quashing the court’s refusal to grant an adjournment. He was also seeking a temporary injunction preventing his trial getting under way until his High Court action has been determined. The DPP had opposed the application.

Dundon’s lawyers had asked the Special Criminal Court to adjourn the trial until 2014 but the State objected because of concerns over the security of a proposed prosecution witness in the case. The court refused to adjourn.

It was claimed the Special Criminal Court erred in law and breached fair procedures and Dundon’s constitutional rights by refusing to grant an adjournment.

Martin O’Rourke SC, for Dundon, said it would be impossible to go through all the material furnished by the Garda before the trial was due to start tomorrow. It was estimated it would take 500 working days to read through the material disclosed to solicitors Madden & Finucane at the beginning of May.