More than €100,000 worth of damage caused during incident outside Waterford city 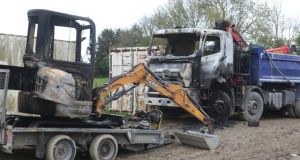 Irish Water vehicles which were burnt out at Lacken Road in Waterford city on Tuesday night. Photograph: Patrick Browne

More than €100,000 worth of damage was caused to three vehicles used by Irish Water in an arson attack on Tuesday night.

Gardaí­ in Waterford are investigating the incident, which happened at a compound outside Waterford city.

It is believed petrol was used in the vandalism attack but it is not clear if the perpetrators threw a petrol bomb or poured petrol over the vehicles.

Units from the Waterford fire service were called to the scene along with gardaí­, after a member of the public reported the fire after 11pm.

It is understood two mini-diggers and a grab-lorry were extensively damaged in the incident.

Gardaí­ sealed off the scene and it is being examined by members of the technical bureau.

The yard involved is used by GMC Sierra, contractors used by Irish Water for the installation of water meters. The yard is located close to the Cork Road on the edge of the city.

The incident is being treated as arson and anyone with information has been asked to contact the Waterford Garda station on (051) 305300.

Gardaí­ confirmed that the attack was the worst on its kind involving Irish Water vehicles in Waterford.

There was some “minor damage” caused to a van in the Ferrybank area last year.