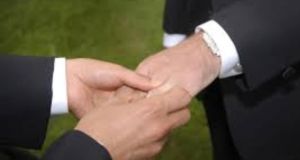 The couple, from Northern Ireland, were married in England

A gay couple have launched a High Court bid to have their marriage declared lawful in Northern Ireland.

The two men issued legal proceedings in a bid to secure a ruling that their relationship status should have equal recognition throughout the UK.

The couple, from Northern Ireland, were married in England after same-sex weddings became lawful there in March last year.

But on their return home it was confirmed that they would still only have civil partnership status in the province.

The couple are now seeking a declaration that their marriage remains lawfully constituted in Northern Ireland.

Lawyers representing them are set to argue that that anything less is irrational, unconscionable and in breach of their human rights.

The case was mentioned for the first time during a private hearing at the High Court in Belfast last Thursday.

An anonymity order was secured before proceedings were adjourned for six weeks.

The couple are being supported in their challenge is by lesbian, gay, bisexual and trans-gender support organisation The Rainbow Project.

John O’Doherty, the Rainbow Project’s Director, said: “While same-sex marriage legislation in Westminster had many positive aspects, we believe that its provision forbidding the recognition of lawful same-sex marriages in Northern Ireland is irrational, contrary to principles of British constitutional law and incompatible with the European Convention on Human Rights.

“We are resolute in our assertion that no-one can be married in one part of the United Kingdom and then not married in another.

“Once a couple is lawfully married in the UK, we contend that their relationship cannot be reclassified as a civil partnership without their consent which is exactly what the law currently does.”

Mr O’Doherty added: “Marriage is a fundamental human right, which is now recognised in the UK as including same-sex couples.

“We will work to ensure that this right is realised for everyone in the United Kingdom and we are confident that Marriage Equality will be achieved in Northern Ireland.”