Dublin’s Victorian-era policemen were early adopters of crime-solving technologies, and the Phoenix Park of the 1880s was home to a world-famous police academy 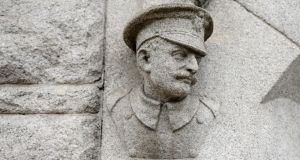 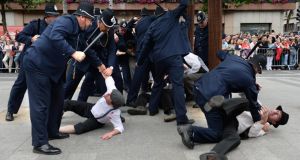 The centenary of the 1913 Lockout has not been kind to the memory of the Dublin Metropolitan Police. The violence with which Dublin’s “bobbies” attacked the strikers (as well as uninvolved bystanders) has been re-enacted graphically (and, by and large, accurately) in street theatre and on screen.

There are few Dubliners now who can remember when the city had its own police force. There are some visible mementos: heads in granite over the door of Pearse Street Garda station; a memorial on Burgh Quay to Constable Patrick Sheahan of Glin, Co Limerick, who died trying to rescue a workman from a gas-filled trench in 1905; an old police lamp on the wall of what was once the archbishop’s palace on Kevin Street.

The DMP was formed in 1836, and patrolled Dublin for just under 90 years. It was typical of the urban police forces that came into being across the UK in the middle years of Queen Victoria’s reign (and marvellously parodied by Gilbert and Sullivan in The Pirates of Penzance.)

Rank-and-file members were drawn from the “better elements” of the labouring and trades classes. They came from all over Ireland, but principally from the rural counties bordering Dublin and from the midlands. Native-born citizens of the capital rarely joined, having little regard for police work. “A bobby’s job” is still a derogatory term in Dublin.

Its commissioners were hand-picked crown officers, often with a legal or military background. Pay for the lower ranks was poor, discipline was strict. The force was unarmed but had a reputation – as did all Victorian police forces – for heavy-handedness.

The DMP differed from its sister forces on the adjoining island in one respect, however. It had its own armed detective branch, known as G Division, based at Exchange Court on the curtilage of Dublin Castle, opposite the present location of Les Frères Jacques restaurant.

The 60 or so “G men” not only investigated ordinary crime; they also functioned as the castle’s political police, keeping tabs on Fenians, land agitators, anarchists and anyone else the castle authorities considered a threat to the established order. They were better-paid than their uniformed colleagues. Each was proficient in the use of the Webley Bull Dog revolver, a .44-calibre weapon, as fearsome as its name suggests.

G Division’s most celebrated member was John Mallon, the son of a Catholic farmer from Armagh, who broke through the religion barrier to become assistant commissioner. He was well respected by Parnell (whom he arrested). But his principal claim to fame was the smashing of the Invincibles after their 1885 assassination of Sir Frederick Cavendish and TH Burke in the Phoenix Park.

New policing technologies
G Division’s security role enabled the DMP to develop new policing technologies earlier than many other forces, giving Victorian Dublin what would now be called a “leading-edge” reputation in early crime forensics. There was little funding available from her majesty’s treasury for the development of ordinary policing functions. But containing political subversion was a different matter. G-Division (and the Special Branch of the Royal Irish Constabulary) had to get the best.

Dublin competed with Edinburgh as a centre of medical training. The Scottish capital emerged as the victor in the development of “medical jurisprudence” in these years.

But in Victorian Dublin, significant first steps were made in the use of police photography, in the development of plaster-cast techniques and in the installation of modern telecommunications equipment. The DMP and the RIC were probably the first police forces to circulate photograpic images of wanted people.

In the 1970s the archives of the Garda Technical Bureau still stored the unsmiling faces of the hapless Invincibles who went to the scaffold – Brady, Fagan, Caffrey, Curley and Kelly – as well as the smarter ones who got away: Walsh, Egan, Byrne, Sheridan and Tynan.

The DMP was an early customer for the new ABC Telegraph, invented by Charles Wheatstone in 1858. This wondrous machine enabled messages to be transmitted simultaneously to more than 30 stations and police posts around the city. The precursor of the teleprinter, it was not especially fast but it was reliable, and it could be operated without any special training or knowledge of Morse Code.

In part because of these advanced technologies, Dublin became the acknowledged world centre of police training in the late 19th century. The police forces of the British empire sent their cadet officers to the Phoenix Park Depot to learn their trade from the Royal Irish Constabulary.

Senior RIC men took their skills abroad to assume command roles, serving the empire in India, Africa, Asia and the Antipodes. The colonies paid the exchequer well for their services; an early form of invisible exports.

Few DMP men got the opportunity for foreign service. The more workaday skills of routine urban policing were not greatly in demand elsewhere. The colonies preferred the expertise of the RIC, which knew better how to keep the natives in line.

Fade to black
Unlike the RIC, which was fully disbanded in 1922, the DMP, in a sense, faded away. Michael Collins broke the G men in the War of Independence. Some were assassinated. Others resigned or left the country.

Many of the uniformed DMP took their pensions when the State was founded. The Free State government hit on the wheeze of renaming the DMP “Póilíní Átha Cliath”. But that never caught on. In 1925, Kevin O’Higgins administered the coup de grace in the Police Forces Amalgamation Act and it ceased to be.

The authorities appointed a commission to inquire into the 1913 “disturbances” in Dublin. When it reported in 1914, it concluded that there was an “error of judgment” on the part of the police and went on to praise their “courage and patience . . . when threatened by a desperate criminal band”. Plus ça change.

Conor Brady’s second novel in the Detective Sergeant Joe Swallow series, The Eloquence of the Dead, is set in Victorian Dublin. It is published this week by New Island Books