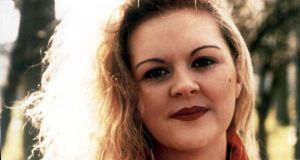 Fiona Pender was seven months pregnant when she disappeared 20 years ago in August 1996. The 25-year-old hairdresser and part-time model was last seen at the flat she shared with her boyfriend on Church Street in Tullamore.

The mother of missing Offaly woman Fiona Pender launched the third annual charity run and walk in her daughter’s memory on Sunday, and revealed she also is writing a book on the disappearance.

Scores of people attended the event, which takes place annually along the 4.5km Fiona’s Way walk along the Grand Canal in Tullamore.

Lone piper Catriona Lloyd played a tune she had composed for Fiona as the walk got under way.

Fiona Pender was seven months pregnant when she disappeared 20 years ago in August 1996. The 25-year-old hairdresser and part-time model was last seen at the flat she shared with her boyfriend on Church Street in Tullamore.

Addressing the crowd from her wheelchair, Fiona’s mother Josephine, who has been in ill-health in recent years, thanked those who had attended.

“It is lovely to see you all and see all the same old faces. You never let us down. We are very glad to be in Tullamore, you are all supporting us very well and we couldn’t ask for better,” she told the gathering.

Speaking after the walk began, Josephine said: “I think Fiona was murdered, because she wouldn’t stay away from me this long and she wouldn’t have left me and not tell me where she was. The only thing then is that she was murdered.”

She again appealed for information in relation to Fiona’s disappearance. “My message as always, it’s to the chief suspect. I doubt if he’ll ever tell me where Fiona is but there is people in the town who would have known things as well and if they come forward and say something it would help an awful lot,” she said.

Josephine and Fiona’s younger brother John have endured multiple tragedies and have had their hopes dashed on a number of occasions, most recently during a major search of woodland in Co Laois in December 2014.

Just over a year before Fiona disappeared, her brother Mark was killed in a road traffic incident. Then four years after she vanished, Fiona’s father Sean took his own life - a death Josephine attributes to the impact of Fiona’s disappearance.

Despite the family’s anguish and the as yet fruitless searches for Fiona, Josephine remains hopeful she will one day be able to provide her daughter and unborn grandchild with a Christian burial.

She said she is not interested in justice and only wants to bury her child and grandchild. “It will never be at an end but if I could find Fiona and lay her to rest with a bit of dignity, that is what I would love, for John and myself,” she said.

“I still keep hoping. I can’t give up, it would be like giving up on Fiona, which I would never ever do,” Josephine added.

Regarding a book she said she is writing, she said: “It starts from me meeting my husband in the rugby club 45 years ago and it sort of goes on from there.

“We always made sure to do family things with them so that they would have these things to remember, but it’s us that has them to remember now, but it’s great to have them. Then it goes into what happened to Fiona,” she remarked.

Josephine has been working on the book for some time. She had hoped to have the book out before Christmas, but now believes it might not be out until sometime afterwards.

The proceeds from the annual walk and run along Fiona’s Way in Tullamore are be donated to homeless charities.