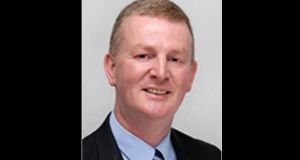 A DUP councillor will be sentenced in four weeks after being found guilty of sexually assaulting a fellow nurse at a care home in Co Antrim.

Belfast Magistrates’ Court heard Ian Stevenson (49), of Headlands Avenue, Ballymoney, asked the woman for a hug and then deliberately squeezed her breast before joking that he would “grope anything”. He denied the allegation.

The woman said she reacted by pushing away Stevenson, who sits on Causeway Coast and Glens Borough Council, and told him “no”.

“He just basically tried to laugh it off and made the joke,” the woman said. “It makes me nervous that somebody in that position could take such an advantage.”

Defence counsel said it was unbelievable that Stevenson, a public figure and nurse of 22 years standing, do such a thing in the middle of a care home. Stevenson claimed the woman offered him a hug after he said he was going to lay a wreath on a friend’s grave, and that he at no point touched her breast.

District Judge Amanda Henderson said she found the injured party’s testimony in the case against to be consistent and credible.

She said Stevenson had failed to provide an explanation for why the woman would fabricate the incident after they had previously been on good terms.

The court heard Stevenson has since been dismissed from his nursing position and is challenging the decison at a tribunal.