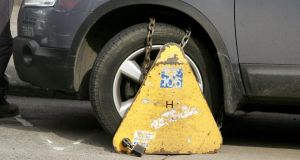 Dublin city councillors have described a suggestion to increase clamping fees by €50 as “crazy”.

At a meeting of the council’s Transport Strategic Policy Committee, various members criticised proposals by Parking Appeals Officer Bill Keilthy to raise the fees by over 60 per cent from €80 to €130.

The idea comes following the release of the parking appeals annual report which showed that Dublin City Council spent €7 million on clamping services which yielded €4.2 million in revenue, leaving a shortfall of almost €3 million.

“The idea of raising the fee by 40 or 50 per cent is crazy given the current state of the economy,” said Fine Gael councillor Kieran Binchy, whose opposition garnered strong support across the chamber at this morning’s meeting.

“I would object to an increase... People can’t afford it. Maybe next year or the year after when things pick up, but not now. People make simple mistakes with parking tickets,” said Sinn Féin’s Ciarán O’Moore, who said focus should be put on clamping being executed “smarter and better”.

While many agreed with Mr O’Moore’s opinion that repeat offenders should face punitive charges rather than those who have been caught just once, other committee members advocated for an incremental increase in fines which could be tied to inflation.

“I don’t believe that those who obey the law should be subsidising those who don’t. I certainly agree with a modest increase, after 17 years I believe that’s fair and justifiable,” said committee chairman Ciarán Cuffe.

“The transgressions of the minority should not be funded by the compliance of the majority- it’s just not acceptable to continue with that any longer,” said Labour’s Jane Horgan-Jones.

“If you’re in any way conscientious it should not be difficult to avoid getting clamped... People who are paying €50 and are getting clamped 50 times a year are probably willing to pay €100 if they’re that stupid and they have that much money,” she added.

Figures released last week showed that motorists across the capital were clamped 56,000 times last year, with drivers in the Merrion Square, Mespil Road, Ormond Quay and Jervis Street areas of the city most likely to get caught out.

According to Dublin City Council executive manager Declan Wallace, any increase in fees charged will not translate to increased revenue for the private clamping firm utilised by the council, which is paid €6.8 million per annum regardless of activity.

He added that such a decision cannot be taken in isolation, and must be made in consultation with the Department of Transport.

Mr Cuffe also criticised members of An Garda Síochána for showing a “flagrant lack of concern for vulnerable road users” due to their on-street parking antics.

“I live near the Courts of Criminal Justice, and it is appalling what the gardaí do every day when the courts are sitting,” added the Green Party councillor, who vowed to alert senior members of the force to illegal parking activities being perpetrated by the drivers of patrol cars.