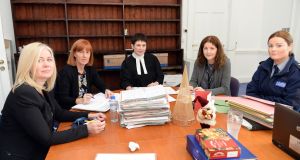 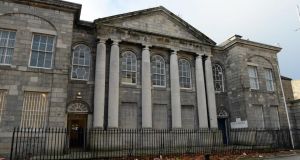 Dublin’s Drug Treatment Court is one of the few courts in the world which advertises its services to offenders.

“We go to treatment centres around the city and meet the staff and try and sell the message about the court,” said its supervisor Tom Ward. “We want them to tell people who might be up on charges to ask for us when they’re in the District Court.

“We work with the judges to try and inform them, but some of them don’t remember to mention it. But we also try and work with the solicitors and the participants so that the message will spread among them.”

And it seems to be working. Last year, the court dealt with 160 new referrals – the biggest number since it was founded in 2000. In 2014, it had 144 referrals, up from just 25 in 2004. Last year also marked the first time the court accepted cases sent by District Court judges outside Dublin.

“There was an issue a few years ago with judges not referring cases,” said Ward, who is the chief clerk of the District and Circuit Courts. “But by and large now it’s fairly well established.

“The judges keep in touch with each other a lot. Generally the judges in the CCJ (the Criminal Courts of Justice where most of Dublin’s criminal courts sit) know the Drug Treatment Court [DTC] fairly well, so they’d be looking out for suitable cases.”

Committing to coming off drugs

Few outside the courts world, however, have heard of the DTC which sits every Wednesday in the historic Green Street Court House, the former home of the Special Criminal Court whose alumni include some of Ireland’s most notorious terrorists and criminals. Its current clients, though some are convicted criminals, are quite different.

“It’s a voluntary programme for people who have been found guilty or have pleaded guilty in the District Court relating to a drug offence. That could be a small possession case or things like shop lifting or breaking and entering. Anything at all where the person’s behaviour is as a result of trying to feed a habit.”

Offenders can ask for a referral and the DTC will check if they are suitable. Once in, they must attend court weekly to update a judge on their efforts to come off drugs.

There are three levels. The bronze level contains people new to the court. Silver is for those trying to give up all drugs, except cannabis. The successful ones can then move on to the final stage, the gold level. Graduating from this requires the participant to be drug free.

Along the way the court operates by carrot and stick. If participants miss a probation appointment, or fail drug tests, they lose points. Lose enough of them and they could get a week in custody.

On the other hand, if they manage to secure a steady place to live or keep their appointments – “pro-social engagements”, as Ward calls them – they gain points.

If they reach 70 points they get a voucher for the Jervis Street shopping centre. This acts as both as a motivation and to help people engage in everyday social tasks, such as clothes shopping.

“We feel that’s important as a signal . . . that they are able to participate in society. The fact that they can go to a shopping centre and buy something . . . it can be a big deal. It doesn’t cost a huge amount.”

The biggest reward is for those who graduate from the gold course. A judge will strike out their original charge completely and they will be free to go. “That’s really important for young people – who might want to travel,” said Ward.

For those who cannot come off all drugs, there is silver graduation. Ward explained that “these are for people who find cannabis hard to come off entirely. What we mean by it is: ‘OK, this is not ideal but we recognise you’ve done as well as you possibly can.’

“The nature of cannabis is that it doesn’t have the same negative social effects as a person addicted to opiates or any of the head-shop drugs. So we send people back to the District Court at that point. And they get a recommendation for a suspended sentence on any charges they have over them.”

The problem, however, is that very few of those who come before the Drug Treatment Court graduate as either silver or gold. So far, just 57 have managed gold – less than 6 percent of the 986 referrals since 2000. Only five people have graduated as silver.

“It’s frustratingly stuck,” said Ward. “It’s difficult for people to move through the final stages and it is a concern.”

For many, however, it is a minor miracle that any of them graduate at all: “If you look at where these people are coming from you realise that if they manage to get hold of any sort of accommodation for six months that is an amazing achievement.

“If they get out of bed in the morning that’s an achievement. We’re dealing with a lot of the hardest cases. You see the people on the news in the hostels. That’s these people.”

The Drug Treatment Court takes its place in the queue for resources, like everyone else: “Of course we would like a lot more of these people clean but we’ve no right of access to any better facilities for drug treatment than anyone else in the public system. We’re completely reliant on the public system to access detox beds or any of that sort of stuff. We don’t have a head start for our participants.

“I suppose on another level that makes sense, you don’t want to have a situation where someone commits a crime to get a detox bed.”

The court also has a huge wash-out rate. Around a third of referrals are discharged for breaking the rules or not making enough progress. Even more are not allowed in because they are judged unsuitable by the assessment team.

“Generally speaking the ones who do better on our programme are the ones with a little bit of life experience who have reached the point in their life where they’re ready to give up. The average is the early 30s for that but you also have people in their 40s and 50s. Most young people are having too much of a good time. They bounce back too quickly.

“We also see a lot more men than women. The women generally have many more problems when they come to us. Typically there are abusive partners and children into the mix. Generally the men don’t get involved in the children at all and they’re in a position to focus on their own recovery.”

The Courts Service states only non-violent offenders are accepted, although Ward says a conviction for violence is not necessarily a barrier to entry, but there are limits. If someone is habitually caught with knives or needles, they are unlikely to be admitted.

“We have to protect the staff who will be meeting them one-to-one. We wouldn’t be worried generally about a once-off but if there’s a pattern of, say, using weaponry, that would be an issue.”

There are also concerns about users who are not seriously trying to give up drugs, or who may be simply seeking to delay an inevitable jail sentence.

A large part of the programme centres on attending school in the Parnell Adult Learning Centre – which puts people on a path to a qualification, offers a day-to-day purpose, and lets court staff monitor them.

However, drug users are useful to those who sometimes even try to get themselves referred to the court to use it as an opportunity to sell drugs to them: “We do get a sense of one or two guys trying to get in to push drugs.

“This is a ready market. We’re very hot on that. We’ll be able to tell very quickly. There’ll be suspicious behaviour and we’re able to pick up on that,” he said.

Other problems have arisen along the way. DTC judges are taken from the District Court bench where they are more used to imposing quick sentences, sometimes dozens of times a day.

However, their role in the DTC is more akin to a social worker who has to cajole and praise those who come before them, who need to learn that recovery from addiction is rarely a straight line.

“It’s definitely a very different skill set to what they’re used to,” said Ward. “Like all these things there are some judges better at it than others. The key thing is they have the interest and enthusiasm for it and they take on board the information the team are giving them. Because really, though the judge is the leader, it’s a team effort.

“Judge [Ann] Ryan was particularly good, she had good empathy and could put herself in the shoes of the people before her. The nature of the District Court it there is a lot of pressure to deal with things expeditiously and also consistently. That can be difficult when you’ve a lot of grey areas around recovery.”

The DTC has implications for others, too in the courts world. Most drug addicts qualify for legal aid, which means their solicitor is paid for each court appearance.

So solicitors miss out on business if clients go down the DTC route as lawyers are not usually required in the court unless there is a specific legal issue.

“But in fairness there are enough solicitors out there who are civic-minded enough and interested enough to say to their clients, ‘Listen there’s a better way of doing things here than constantly coming up on charges.’ The key thing is that somebody has to speak up in court to say, ‘Tom or Jack would be a good candidate for the DTC’.”

The success rate of the DTC remains low but the numbers are going in the right direction, said Ward, who treasures the days when some of the court’s charges graduate.

“There’s a big ceremony in front of all their mates and the whole court where the judge will ceremoniously strike out all the charges against them. Each team member says something personal about the graduate personally. Then they’re invited to sit in the judge’s chair and make a short speech. There are plenty of bad days but the graduations are definitely a good day.”