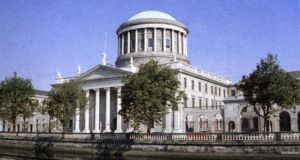 Joanna Jordan had previously brought a petition aimed at overturning the Children Referendum Yes result but that was rejected after Mr Justice Paul McDermott found she had failed to prove, on the balance of probabilities, a one-sided Government information campaign materially affected the outcome.

A High Court judge has dismissed a legal challenge by a Dublin woman to the constitutionality of laws governing challenges to the results of referendums.

Joanna Jordan, who campaigned for a No vote in the November 2012 Children’s Referendum, had brought a petition aimed at overturning the Yes result but that was rejected last year after Mr Justice Paul McDermott found she had failed to prove, on the balance of probabilities, a one-sided Government information campaign materially affected the outcome.

Ms Jordan, Glenageary Road Upper, Dun Laoghaire, Co Dublin, then asked the court to declare unconstitutional provisions of the Referendum Act 1994 which require, before a petition may be brought disputing a referendum result, that the petitioner must show, on the standard of balance of probabilities, wrongful conduct such as to “materially affect” the outcome.

She relied on the November 2012 Supreme Court finding in the case by Dublin engineer Mark McCrystal that the Government spend of €1.1 million public monies on a one-sided information campaign amounted to a “clear disregard” of the limits imposed by the Constitution on what the State may do in a referendum.

In her constitutional challenge, Ms Jordan argued it was effectively impossible for a petitioner to prove, on the standard of balance of probabilities,  such a material affect and the onus should be on the Government to prove its information campaign did not materially affect the referendum result.

In his detailed judgment today, Mr Justice McDermott said the material affect standard was intended to ensure vexatious challenges do not impede the proper promulgation of referendum results and he rejected claims it imposed an excessively onerous burden of proof on Ms Jordan.

He did not accept it was impossible to prove the material affect based on a standard of balance  of probabilities, the judge said. There was also “no basis” for her claim the material affect standard granted the Government an effective immunity from bids to overturn referendum results.

The material affect standard was “entirely in accordance with the constitutional supremacy of the will of the people as evidenced by the provisional referendum certificate”, he said. It was “entirely reasonable, rational and proportionate” that a petitioner who seeks to set aside the will of the people, “properly expressed and freely given”, should bear the onus of proof of doing so.

He also considered the Supreme Court’s declaration in the McCrystal case that the government campaign breached the McKenna principles preventing use of public funds to support one side in a referendum, plus the provisions of the Referendum Act under which Ms Jordan brought her petition, had provided an immediate, effective and adequate remedy for breaches of constitutional rights arising from the Government information campaign.

On those and other grounds, he rejected claims of any breach of Ms Jordan’s rights to an effective remedy under the Constitution and European Convention on Human Rights.

Ms Jordan is appealing Mr Justice McDermott’s findings to the Supreme Court and a hearing date is to be fixed later. Costs issues will also be addressed later.