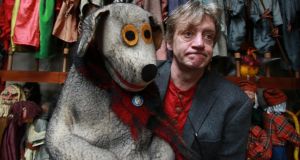 Liam Lambert in the fire-damaged area of the Lambert Puppet Theatre with Judge of ‘Wanderley Wagon’. Photograph: Nick Bradshaw

A 16-year-old boy has been charged with arson after a fire gutted the Lambert Puppet Theatre – home to the characters of children’s television programmes Bosco and Wanderly Wagon.

The blaze broke out on August 28th in the theatre at Clifton Lane, Monkstown, Co Dublin. It is estimated €150,000 worth of damage was caused to the historic venue, which was founded in 1972 by Eugene Lambert and is now run by his son Liam Lambert.

The teenager, who cannot be named because he is a minor, was refused bail after appearing at the Dublin Children’s Court charged with arson and burglary.

Judge John O’Connor was told the youth allegedly broke into the theatre but started the fire only after he noticed there were security cameras on the premises.

The court heard the boy was arrested at his south Co Dublin home on Monday and he “made no reply” when the charges were put to him.

Garda Neil Doyle objected to bail citing the seriousness of the case. He told the judge it was alleged that “the culprit entered the property, spending 45 minutes on the premises, ransacked an office and on noticing CCTV cameras the culprit started two fires, causing considerable damage to the theatre and high- value puppets.”

He said the offences can carry maximum sentences of between 10 and 14 years.

The judge noted the accused’s medical problems but he refused bail due to the seriousness of the case, meaning the teenager’s lawyers will have to bring an application to the High Court to get him released pending trial.