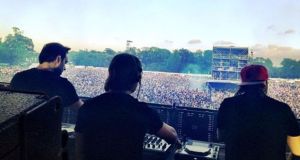 A man who collapsed after attending a Swedish House Mafia concert in Phoenix Park died as a result of ecstasy and cocaine toxicity, a coroner has found.

Shane Brophy (21) from The Swan, Crettyard in Co Laois, died at Connolly Hospital, Blanchardstown, on July 8, 2012.

He had been taken to A&E by ambulance after collapsing at a friend’s apartment in Lucan having attended the concert.

Dublin Coroner’s Court previously heard he was seen taking cocaine on the way to the concert and was later seen buying pills from another concert-goer.

Witnesses said that following the concert, he was sweating and shaking, rolling around on the ground and “talking to people who were not there”.

An ambulance was called when friends became concerned after arriving back at the apartment.

Emergency medicine registrar Dr Salah Bibars gave evidence that the hospital was exceptionally busy with an “unprecedented number of ambulance transfers” from the concert. He was told by paramedics that Mr Brophy’s friends indicated he had taken a “large number of illicit drugs”.

Mr Brophy was given Naloxone, an opiate antidote. A toxicology screen subsequently found amphetamine, methamphetamine and cocaine only in Mr Brophy’s urine.

Dr Bibars said giving Naloxone while waiting for toxicology results was protocol and that it would not harm patients who had not taken opiates.

After a post-mortem, the cause of death was given as drug toxicity involving ecstasy and possibly cocaine.

The inquest was adjourned after legal representatives for the family raised concerns about the administering of Naloxone.

When the inquest resumed, solicitor Justin Cody submitted a copy of the Irish Medicines Board’s product characteristics for Naloxone, which says caution should be used when administering it to patients who have taken cardio-toxic drugs including cocaine and methamphetamines.

The inquest earlier heard that prior to his cardiac arrest, Mr Brophy’s heart was monitored using a machine that does not produce print-outs. Mr Cody said that in the absence of this record, it is not possible to determine to any degree what effect Naloxone had on his heart rate.

Coroner Dr Brian Farrell said that he had no evidence that the administration of the Naloxone had a “deleterious effect”.

“There is no doubt that he had a devastating toxic reaction to the ingestion of ecstasy and that cocaine would have exacerbated that,” he said.

He said he would not be able to resolve the Naloxone issue and would have to remain silent on it.

He returned a narrative verdict outlining the facts stating that Mr Brophy died from ecstasy and cocaine toxicity.

Following the conclusion of the inquest, Mr Cody read a tribute from the family into the record: “Shane was the youngest member of our large and closely-knit family. We were all proud of him. He was a loving, caring, witty, bright individual who touched and enriched many lives.

“Those who knew Shane well will always remember him and smile. The events of July 7 and 8, 2012, will forever be remembered with great sadness and heartache by our family.

“We thank God for the 21 years that we had with Shane and we will spend the rest of our lives wishing we could have had more,” he said.