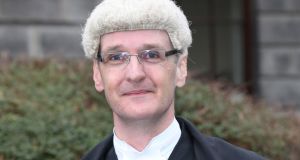 The Supreme Court is to hear an appeal by the State over a finding of unconstitutionality concerning a law preventing recognition, for family reunification purposes, of marriages of refugees which took place after they sought protection here.

The High Court’s Mr Justice Max Barrett made the declaration of unconstitutionality last July in relation to Section 56.9.a of the International Protection Act 2015, which states a refugee can apply for permission for a spouse to enter and reside with them in Ireland provided they had married before the applicant sought international protection here.

He also granted a declaration under the European Convention on Human Rights Act 2003 that section 56.9.a is incompatible with the State’s anti-discrimination obligations under Article 14 of the convention, read in conjunction with Article 8 of the convention, providing a right to respect for private and family life.

As a result of his findings in favour of an Afghan man who brought the case, he ruled the man is entitled to an order quashing the Minister for Justice’s refusal to recognise his marriage for family reunification purposes.

The Minister and the State later sought a “leapfrog” appeal, one direct from the High Court to the Supreme Court, against his decision.

The Supreme Court judges considered the application and, in a determination published on Friday, said the court would hear the appeal on a date to be fixed later.

The appeal raised a net issue of law of general importance, they said. Arising from the State’s arguments that Mr Justice Barrett had declined to follow another High Court decision, the Supreme Court said the appeal also raised questions as to the circumstances in which a High Court judge may depart from a decision of the judge of the same court.

The case concerns a man who got refugee status here in July 2015 after fleeing Afghanistan.

On April 3rd 2017, he went to Pakistan to marry a woman who was born there but whom he had grown up with in Afghanistan. He returned to Ireland and on April 19th submitted a family reunification application.

In October 2017, his application was refused by the Minister under section 56.9.a on grounds the marriage was not subsisting when he applied for protection in 2015.

The man challenged the refusal in judicial review proceedings against the Minister and State with the Irish Human Rights and Equality Commission as a notice party.

In his July judgment, Mr Justice Barrett accepted the man’s arguments that section 56.9.a meant his marriage is treated less favourably than refugees who married before they applied for international protection.

The judge ruled that distinction is unconstitutional. In dealing with the human rights convention incompatibility argument, the judge followed a 2013 decision of the European Court of Human Rights in the case of Hode and Abdi v the United Kingdom.

In that decision, the European court stated that, inter alia, if domestic law confers a right to be joined by spouses of certain categories of immigrant, it must do so in a manner compatible with Article 14 of the convention.