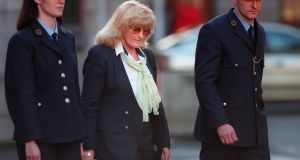 A Supreme Court appeal with implications for proceedings aimed at disinheriting the late Catherine Nevin has been fixed for July.

Before her death last month, the Supreme Court had agreed to hear an appeal brought by Ms Nevin over a finding that her conviction could be used in a proceedings taken by siblings of her late husband Tom Nevin aimed at disinheriting her and claiming damages for wrongful death.

Those proceedings, if successful, could affect the extent of the estate of the late Ms Nevin, who has left a will.

The Chief Justice, Mr Justice Frank Clarke, was told on Tuesday that the executrix of Ms Nevin’s estate is prepared to continue her appeal.

Ms Nevin was jailed in 2000 after being convicted of her husband’s murder at their pub, Jack White’s Inn near Brittas Bay, Co Wicklow, in March 1996.

She lost appeals over her conviction as well as an attempt to have it declared a miscarriage of justice.

Ms Nevin claimed she was entitled to his assets, or part of them, by virtue of survivorship and the laws of intestacy.

The High Court in 2013 determined, as a preliminary issue, her murder conviction was admissible in civil proceedings as “prima facie evidence of the fact that she committed such a murder”.

The Court of Appeal last year held that the High Court had correctly decided admission of the conviction involved an exception to the rule against admitting hearsay evidence, which was justified on grounds of necessity and relevance.

However, Ms Justice Mary Finlay Geoghegan said the High Court finding that proof of a conviction for murder with all appeals exhausted does not of itself meet the proofs required by Section 120(1) of the Succession Act 1965 dealing with disinheritance should not be regarded as a “final” determination.

The Supreme Court had agreed to hear an appeal over the Court of Appeal’s decision on the basis that the issues raised are of general public importance and the relevant law and procedure requires clarification.