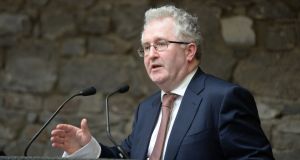 A copy of the report has been made available to Supreme Court judge Séamus Woulfe. Photograph: Alan Betson

The Supreme Court has confirmed receiving the report of former Chief Justice Susan Denham into the attendance of Supreme Court judge Séamus Woulfe at an Oireachtas Golf Society dinner.

The move is expected to herald significant developments in the matter in the coming days.

In a statement on Tuesday from the Chief Justice, Mr Justice Frank Clarke, the Supreme Court confirmed it had received the report earlier and had made a copy of it available to Mr Justice Woulfe.

“The Supreme Court is considering the report and will issue a further statement in early course,” the brief statement concluded.

The statement represents the first public comment of the court on the golf dinner attendance since August 24th when it issued a statement saying it had asked Ms Denham to carry out a review concerning Mr Justice Woulfe’s attendance at the event in Clifden.

Ms Denham was asked to consider whether Mr Justice Woulfe should, in all the circumstances, have left the hotel in light of the situation prevailing and whether he should have played golf without attending the dinner.

In the context of those questions, Ms Denham was also asked to consider whether there are any relevant codes of practice or guidelines and to make any recommendations in that regard which she considers appropriate.

The Supreme Court said that “non-statutory” approach to the review was required because the sections of the Judicial Council Act concerning codes of conduct and a mechanism to handle complaints against judges have yet to be commenced.

Mr Justice Woulfe, the former attorney general, was among more than 80 guests who attended the dinner on August 19th after two days of golf. The event at the Co Galway hotel went ahead despite Covid-19 public health guidelines placing limits on indoor gatherings. It was attended by several TDs and Senators, along with former TDs and senators.

The controversy surrounding the event has led to the resignation of Fianna Fáil TD Dara Calleary as minister for agriculture and European Commissioner Phil Hogan.

In the course of her review, Ms Denham met Mr Justice Woulfe, who was accompanied by Michael Collins SC, who he had retained following the announcement of the review. According to sources, a draft of the report was provided to Mr Justice Woulfe prior to Ms Denham finalising it

The matter is the subject of intense speculation in legal circles, including whether the report will be published.

It is understood all of those involved are anxious the matter should be comprehensively addressed prior to the full opening of the new law term next week. In that context, a further statement from the Supreme Court concerning the matter is expected this week.

According to an earlier version of the published Supreme Court diary for the new law term, commencing next Monday, Mr Justice Woulfe, a former attorney general who was appointed to the Supreme Court in July, was due to sit for the first time as a judge of the Supreme Court next Tuesday to hear an appeal entitled AIB v Ennis.

The latest published version of the diary contains no listing setting out the names of the judges who will hear that appeal.

Mr Justice Woulfe had last month issued a lengthy statement saying that he attended the dinner on the understanding that it would be adhering to public health guidelines and apologised for any unintentional breach of them.