No room for marriage allowing more than one wife - court

Recognition of polygamy ‘would give legal effect to discrimination and subordination’ 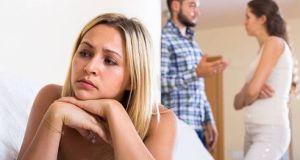 The Supreme Court said the basic rule is that Ireland recognises foreign marriages unless they conflict with public policy in our law. Posed photograph: iStockPhoto

All people are equal before the law, so Irish law has no room for a version of marriage that, by its structure, allows a husband have more than one wife.

So ruled the Supreme Court on Thursday.

“To give legal recognition to such a structure would be to give legal effect to discrimination and subordination in a relationship where the principle of equality should show sway,” wrote Ms Justice Iseult O’Malley, in a judgment supported by six of her colleagues in a seven-judge court.

Nevertheless, the court overturned a High Court ruling from 2011 and decided that the first wife of a man who married twice in Lebanon, before moving here, should be a recognised as his spouse under Irish law.

The Lebanese man had married two women in Lebanon. He sought asylum here in 1998, and was recognised as a refugee in 2000. His second wife was admitted here, with some minor children, in 2001, on the basis that she was his spouse. She is now an Irish citizen. She came as part of the family reunification system.

In 2002, the man was granted Irish citizenship and applied that his first wife be allowed to enter the State. It appears the only reason she did not travel earlier was she did not have the correct papers.

The State refused to admit the first wife under the refugee system, on the basis that he already had been joined by his second wife.

However, the first wife subsequently arrived as an asylum seeker, and has been here since 2006. Her asylum application was refused, but she was granted permission to remain on a temporary basis.

The Supreme Court ruling means she now has the right to remain.

The man has children by both women in the State, some of whom are here as recognised refugees, and others were admitted as part of the family reunification process.

The Supreme Court said the basic rule is that Ireland recognises foreign marriages unless they conflict with public policy in our law.

At the outset, Ms Justice O’Malley recognised that rulings in this area are capable of causing distress and indeed unfairness, because legal systems around the world differ in how they regulate human relationships.

The Attorney General argued that neither Lebanese marriage should be recognised, and that Irish public policy is opposed to the “attachment of legal consequences in this State to polygamous marriages”.

The court noted there are more than 60,000 Muslims living here. Many of these may have married in countries that allow polygamy. However, there are apparently few instances of polygamous households here.