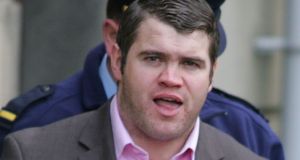 Brian Rattigan who has won an appeal against his conviction for the murder of a man in Dublin more than 16 years ago. Photograph: Collins

Brian Rattigan has won a Supreme Court appeal against his conviction for the murder of a man in Dublin more than 16 years ago.

The Director of Public Prosecutions will decide later whether to apply for a retrial for Rattigan, who remains jailed for another offence of drug dealing.

By a three to two majority, the Supreme Court allowed the appeal by Rattigan, of Cooley Road, Drimnagh, against his conviction for the murder of Declan Gavin. Mr Gavin (21) died after being stabbed outside Abrakebabra in the Crumlin Shopping Centre on August 25th, 2001.

The court found the judge in the 2009 trial, Mr Justice George Birmingham, had in some of his closing comments to the jury unintentionally engaged in “a piece of advocacy in favour of the prosecution”.

Rattigan was jailed for life in 2009 after a majority jury convicted him of murder. The Special Criminal Court later found him guilty of organising a €1 million heroin deal from his prison cell.

The Court of Appeal had previously dismissed an appeal over his conviction for Mr Gavin’s murder.

There was a “real possibility” they may have been seen by the jury as reflecting the trial judge’s personal opinion and may well have influenced the jury’s view of the defence case, she said.

The passage complained of included references by the trial judge to the prosecution contending Rattigan was “the knife man” and remarking, if the prosecution was wrong about that, Rattigan was “unfortunate” in a number of respects including leaving his finger prints in two places at the crime scene.

The trial judge also remarked that Rattigan was “unlucky” that the knife man used a Nissan Micra car similar to one owned and driven by his friend of his. Ms Justice O’Malley said the issue was not whether the trial judge’s analysis was sustainable on the evidence and it “may well have been”. The point was it is for the jury to find the facts, subject to direction on legal matters from the trial judge.

Ms Justice Elizabeth Dunne and Mr Justice Peter Charleton disagreed with the majority view that the appeal should be allowed on the issue of the judge’s comments. Ms Justice Dunne said the comments complained of were “permissible comment” and she could not see how the reference to coincidence rendered the charge to the jury unsatisfactory.

All five judges rejected a second ground of appeal concerning the admission of witness statements at his original trial.

That ground centred on interpretation of Section 16 of the Criminal Justice Act 2006 which allows for admission of out of court statements where the witness involved refuses to give evidence, denies making the statement, or gave evidence in court which was inconsistent with the statement sought to be admitted.

Rattigan’s lawyers argued it was unfair to apply Section 16 retrospectively and there was a breach of his constitutional rights. Had his prosecution been conducted speedily, his trial would have taken place before Section 16 came into force, they said.

Rattigan is set for release from prison in a little more than three years unless he is retried and convicted of the murder of Mr Gavin for a second time.

Garda sources believe the passage of time and the fact that one of the key witnesses from the original case is now dead may complicate any potential retrial.

David Byrne was murdered in a gun attack at the Regency Hotel in February 2016, which was part of the Kinahan-Hutch feud. Though he resiled in court from the description of the murder he initially gave gardaí, Byrne was one of only three eyewitnesses identified.

The Director of Public Proescutions is set to consider the matter of a retrial.

Rattigan is also appealing against the drugs conviction for which he was jailed for 17 years. That appeal was due back in the courts next Tuesday, though a substantive hearing will not take place until next year.