Catherine Nevin challenged ruling that conviction could prevent her getting inheritance 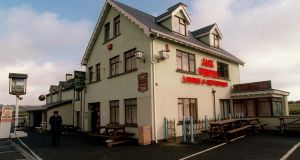 The hearing of a Supreme Court appeal over a dispute relating to the estate of publican Tom Nevin, whose late wife Catherine Nevin was convicted of his murder, has been adjourned.

The court was due on Monday to hear an appeal over whether Ms Nevin’s conviction could be used in a case by Mr Nevin’s relatives preventing her inheriting any part of his estate.

The High Court in 2013 found it could be and the Court of Appeal upheld that decision.

Ms Nevin died in a hospice last February having been given compassionate temporary release from her life sentence.

Several months before her death, she lodged an application for leave to appeal the Court of Appeal decision on grounds it raised a point of law of exceptional public importance.

The Supreme Court last July agreed to hear a further appeal and listed it for hearing on Monday before a five-judge court.

However, when the court convened with just Chief Justice Frank Clarke sitting, he said the case would have to be adjourned after a “difficulty had arisen”.

He did not say what the difficulty was but apologised to the parties on both sides and said a new date would be found and they would be informed of it.

Tom Nevin’s mother, Nora, brought the original proceedings in November 1997, seeking that his widow be disinherited. Mr Nevin died without having made a will and they had no children which generally means the entire estate goes to the widow.

Mr Nevin was murdered in 1996 at he pub the couple jointly owned, Jack White’s Inn in Brittas, Co Wicklow. Ms Nevin reopened the pub for a short time before it was sold in 1997 for IR£620,000. She always denied any involvement in his death.

Nora Nevin died in 1999 intestate and Tom’s brother, Patrick Nevin, and his sister Margaret Lavelle, took over the case. They have opposed her appeal and say it does not involve a point of exceptional public importance as claimed. The appeal is being continued for the beneficiary/beneficiaries of Catherine Nevin’s estate.