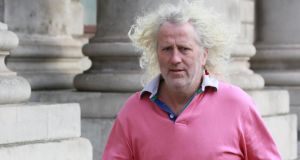 Former minister for justice Alan Shatter received data on Mick Wallace TD (Ind) from former garda commissioner Martin Callinan and disclosed it for his own political advantage in a manner he had subsequently resiled from and apologised for, a court has been told.

The claim was made at the conclusion of Mr Shatter’s appeal against the Data Protection Commissioner’s (DPC) decision on a complaint taken by Mr Wallace after the then minister last year told RTÉ’s Prime Time that Mr Wallace had been cautioned by gardaí for using a mobile phone while driving.

Judgment has been reserved in the case.

Solicitor Gareth Noble, for Mr Wallace, told the court the DPC had carefully considered the complaint from Mr Wallace over a lengthy period during which all parties had co-operated.

“Some deference” needed to be made to a public body that conducted its inquiries in such a considered and independent manner.

“The use of this private data by the minister on the Prime Time programme on the night in question, after consultation with the garda commissioner, was to further the minister’s own political (agenda),” he said.

Mr Noble also told Judge Jacqueline Linnane, at Dublin Circuit Civil Court, that the office of the DPC was “entitled” to have arrived at its conclusion that Mr Shatter was a controller of the data relating to Mr Wallace and that he had breached the Data Protection Act in disclosing it.

Mr Noble contended it was not for the court to agree or disagree with the ruling, but to consider if the process by which it was arrived at was sound.

He said the DPC had established the circumstances by which the data had been received by Mr Shatter – during a conversation with former commissioner Callinan.

And while the office had also satisfied itself that Mr Shatter was a controller of the data, even thought it resided in his mind, the DPC had established a physical note of the information existed, meaning it was data under the definition of the Act.

The data had been received from a third party without MrWallace’s consent and had been disclosed without his consent.

However, the court was also told while the Garda Síochána Act 2005 prohibited Garda members from disclosing information, the garda commissioner of the day was exempt from those provisions.

Eileen Barrington, for Mr Shatter, disputed an assertion made on the opening day of the hearing yesterday by barrister Paul Anthony McDermott, for the DPC.

He told the court that Mr Shatter had no right to take the appeal. He said that at all stages the complaint to the DPC was made against the Minister for Justice, “who happened to be Mr Shatter at the time.”

He contended only the minister of the day could appeal the decision.

However, Ms Barrington said it was clear from many previous cases that ministers were entitled to pursue legal actions relating to events when they were in office and that could continue unaffected when they left office.

She said former minister Phil Hogan was currently progressing a defamation cases that related to his time in office and that was continuing despite his no longer being a minister.

Ms Barrington added that Mr Shatter qualified under the Data Protection Action to bring his case as the legislation provided for such actions by “aggrieved persons” and “persons adversely affected” by DPC cases.

She said the decision of the DPC had been addressed to Mr Shatter and carried consequences for him.

“Not wishing to be flippant, but he doesn’t leave his head behind him in the office,” she said of Mr Shatter’s retaining the contentious data in his head, where it would stay whether he held office or not.

However, she told Judge Linnane that if the court ruled Mr Shatter, now out of office, was not the controller of the data disclosed about Mr Wallace and therefore could not now bring his appeal, it followed he would not be liable for damages that the controller of disclosed data can be pursued for.

Yesterday, Ms Barrington told the court Mr Shatter did not make a note for the information; it merely “resided in his mind”, Ms Barrington said. He would be concerned if the data protection laws could be used to regulate information or the processing of information in someone’s mind, she said.