Priest has conviction for 1970s sex assault of boy quashed 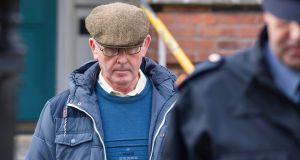 Tadhg O’Dalaigh acknoweldged during the course of the trial that he had indecently assaulted 10 boys at the school, but adamantly denied assaulting the complainant.

A priest who was jailed for indecently assaulting a schoolboy in the 1970s has had his conviction quashed over a trial judge’s decision not to warn the jury about the dangers of convicting in the absence of corroboration.

Tadhg O’Dalaigh (73), of Blackrock, Dublin had pleaded not guilty at Cork Circuit Criminal Court to one count of indecently assaulting a 16-year-old boy at Coláiste Chroí Naofa in Carrignavar, Co Cork on a date unknown in 1979.

He was found guilty by a jury and sentenced to five years’ imprisonment, with the final two suspended, by Judge Donagh McDonagh on December 18th, 2014.

O’Dalaigh successfully appealed his conviction on Monday, with the Court of Appeal holding the trial judge erred in refusing to give the jury a corroboration warning, in a case which lacked corroborative evidence.

Giving judgment in the three-judge court, Mr Justice Alan Mahon said the alleged indecent assault took place at a boarding school in Co Cork, where the complainant was a pupil and O’Dalaigh a member of the school’s staff.

The alleged single incident took place at night time when the complainant awoke to find himself being masturbated.

The complainant made no complaint for 33 years, having undergone counselling and spoken to a solicitor about taking a civil claim for damages against O’Dalaigh’s religious order.

O’Dalaigh had pleaded guilty in 1999 and again in 2014 to indecently assaulting a number of pupils at the same school. These convictions had been reported in the press and O’Dalaigh had been named.

He had acknowledged during the course of the present trial that he had indecently assaulted 10 boys at the school, but adamantly denied assaulting the complainant.

It had been pointed out that other priests had been involved in the sexual abuse of pupils at the school. In effect, O’Dalaigh maintained that if the complainant had been abused as alleged, the abuser was another staff member.

Mr Justice Mahon said the trial judge’s reasoning for not giving a corroboration warning was threefold: contextualisation was necessary but impossible to achieve because the offence was secretive, it would only serve to confuse the jury, and would not be of benefit to the accused.

He added the lack of corroborative evidence itself placed the case into a category of cases in which a trial judge should lean towards giving a warning.

The concept of corroborative evidence was not a difficult one and is well capable of being absorbed and understood by persons without legal training. It was by its nature “simply an admonition” to exercise care before finding a person guilty, in the absence of corroboration.

It is a warning, when properly given, which also makes it clear to the jury that they may find the accused guilty in the absence of corroboration.

The fact the nature of the offence was secretive and surreptitious “significantly increased the justification and appropriateness of giving a corroboration warning”.

It was a case of one person’s word against another. The duration of the assault was also quite brief. It occurred at night time when the complainant was initially asleep.

He said a corroboration warning, properly given, had the potential to have been of considerable benefit to the accused.

Mr Justice Mahon, who sat with Mr Justice George Birmingham and Mr Justice John Hedigan, said the court was satisfied that there had been an error in principle.

The court allowed the appeal, quashed the conviction and will hear submissions as to whether or not it would be appropriate to order a retrial later this week.

O’Dalaigh was not in court for delivery of the judgment. His barrister, Mark Lynam BL, said his client had “served his sentence”.