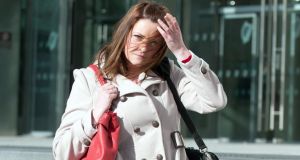 Ursula Shannon at the Special Criminal Court today where she was jailed for six years. Photograph: Collins Courts.

A Trinity College graduate and three men who were intercepted by armed gardaí outside the premises of a firearms dealer have received sentences ranging from six to seven years for the possession of firearms and ammunition.

Earlier this month Ursula Shannon (30), who is a PhD student, graduate of Trinity College and prominent member of socialist republican group Eirigí, with an address at Inglewood Crescent, Clonsilla and her co-accused John McGreal (37), Thornchase, Palmer Road, Rush, and Colin Brady (24), Ashgrove, Baskin Lane, Kinsealy, were found guilty of the offences by the Special Criminal Court after a short trial.

The non-jury court heard the accused were wearing wigs and disguises when they were intercepted by armed gardaí outside a residential premises in Co Offaly which also doubled as a business for a licensed firearms seller.

Detective Inspector Michael Gibbons told the court that one of the handguns recovered, a Brazilian-made Taurus pistol, was used in a murder in Tallaght in February 2002. He said there was no suggestion that any of the defendants were involved in that offence.

There was also evidence that the ammunition recovered was wrapped up in a baby’s nappy found inside the stolen van in which the defendants were travelling.

CCTV footage of the interception of the stolen van was played to the court, which was invited to infer that the people in the van were there to rob the shop and steal the firearms on the premises.

Shannon, McGreal and Brady had pleaded not guilty to the possession of two handguns and 32 rounds of ammunition at Tullybeg, Rahan, Co Offaly on November 27th, 2012, but had not challenged any of the evidence in the case.

John Troy (34), a fourth co-accused of Dunard Avenue, Cabra had pleaded guilty to the unlawful possession of the same Taurus pistol, magazine, Walther P5 pistol and one ZGJY branded combined stun gun and flashlight on the same date.

McGreal and Troy were also charged with membership of an unlawful organisation within the state styling itself the Irish Republican Army, otherwise Oglaigh na hEireann, otherwise the IRA on November 27th, 2012.

Counsel for the State, Mr Shane Costelloe BL, told the court that the Director of Public Prosecutions was entering a “Nolle Prosequi” — in other words not proceeding — with those charges.

The court heard evidence that John Troy is a master butcher who along with his brother runs the well-known Troy’s Butchers on Moore Street in Dublin city centre, which has been in operation for over one hundred years.

Counsel for Shannon, Mr Leo Mulrooney BL, told the court that his client was a young lady with “many interests, abilities and talents”.

He told the court that Shannon has a BA in Early and Modern Irish from Trinity College and a Masters in Language Planning from NUI Galway. She is currently doing research into sustainable new Irish language communities for her PhD.

Passing sentence, presiding judge Mr Justice Paul Butler said that in respect of Shannon, McGreal and Brady the court had come to the view that a sentence of seven years in prison was appropriate.

However, Mr Justice Butler said the court would allow a year for the fact they had not contested the evidence at trial, bringing the sentence to one of six years for each accused. He said in the case of Mr Brady the sentence would date from November 29, 2012 as he had been in custody since that date.

With regard to John Troy, Mr Justice Butler said the court noted that he had a very relevant previous conviction which made the matter much more serious.

However, in mitigation he said the court had heard evidence that Troy has an “exemplary background” and was a “very useful” member of his community.

Mr Justice Butler said the court had come to the view that the appropriate sentence would be nine years imprisonment, reduced to seven years after making an allowance for the plea of guilty proffered.

He said a note from Troy, which states that upon his release from prison he is determined not to be before the Special Criminal Court or any court again, was a “significant matter” and as far as the court was concerned was a statement as to future conduct.

Mr Justice Butler said on that basis the court would suspend the final two years of the seven-year sentence on condition that Troy enter a bond to be of good behaviour and keep the peace.

It was the prosecution case that on the date in question gardaí were in receipt of confidential information that a stolen vehicle would be used as part of an operation by dissident republicans for a theft at a property in Co Offaly.

The court heard that a search of the vehicle revealed the two handguns and the stungun along with the ammunition, cable ties, black pillow cases, canisters of petrol, wigs and disguises.

Gardai gave evidence that the accused had taken some steps to conceal their physical appearance, and were wearing layers of clothing to make them appear heavier than they actually were. There was evidence that Shannon and McGreal were also wearing wigs.