Perry got loans to deal with tax arrears, bank claims 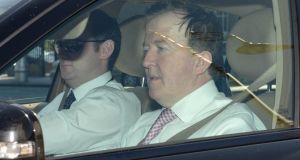 Minutes note Minister of State John Perry expressed shock at bank’s “aggressive approach” to him and asked if it was treating other customers like this.

Minister of State John Perry told Danske Bank in January 2012 that Bank of Ireland had agreed to give him a ten-year loan to help him address tax arrears of about €100,000, according to the bank’s minutes of meetings held with Mr Perry over loan repayment arrears.

Mr Perry also told Danske that AIB had agreed to give him an 11-year loan to pay €125,000 to other creditors and his other lenders had agreed to continue facilities on an interest-only basis, the minutes state.

At another meeting of January 31st 2013, after the bank indicated it would issue a demand and seek judgment or a receiver if satisfactory proposals were not provided by Mr Perry, he had expressed shock at the bank’s “aggressive approach” to him and asked if it was treating other customers like this, the minutes note.

Mr Perry had alluded to the personal consequences of such actions by the bank “with his job” and also indicated he took exception to being given deadlines, according to the minutes.

The minutes added Mr Perry “proceeded to let me know that this was a changed bank from the days when the bank were ringing to offer him loans for anything”.

Mr Perry, the minutes said, “indicated that this was a form of bullying” and asked if the bank was dealing with all its customers in a similar way. Mr Perry’s adviser Noel McCarrick later indicated they would revert to the bank within a timeframe set by it.

The minutes relate to some of a number of meetings held between Danske and Mr Perry about delays in making repayments on a loan of €2.4 million made to him and his wife Marie in October 2011.

The bank earlier this week secured judgment for €2.47 million, on consent, against the couple at the Commercial Court but Mr Justice Peter Kelly stayed execution and registration of judgment to September 2nd to allow them time to try and restructure loans.

Among the exhibits for that application were various minutes of the bank and a letter from solicitors representing Mr Perry, dated January 23rd 2012.

Minutes prepared by Danske, dated January 18th 2012, state Mr Perry told Danske he had met with Denis McArdle of Bank of Ireland who had agreed to provide €88,000 over ten years.

Mr Perry, the minutes stated, had already paid the Revenue three instalments of €8,000 in reduction to his €125,000 liability.

The minutes noted Mr Perry had called to the bank to discuss delay in receiving rental payments from a supermarket tenant in Ballymote to service the €2.42 million loan given to him and his wife Marie in October 2011. The first payment of interest, €8,101, was due on December 19th 2011 with the next payment of €7,726 due on January 19th 2012, Danske said.

Mr Perry had had to spend some €20,000 installing a firewall between the supermarket and an adjoining premises, the minutes stated. That was not anticipated and had consumed initial rental payments from the tenant, it was noted.

The minutes stated Mr Perry also advised some miscellaneous creditors had to be paid arising from his previous trading in the supermarket. He believed those could be settled for €125,000 and advised AIB had agreed to provide an 11 year facility to fund that, it was noted.

Mr Perry also asked if Danske would accept a discount on its loan in the event of the supermarket being purchased at a later date but the bank responded that would not happen and it would look for full repayment.

Minutes of another meeting, dated April 17th 2013, noted Mr Perry had given an outline of “the current economic woes in the property market” (€1.8 million hotel in Ballymote which sold for €160,000 last week) the lack of liquidity in the banking market, together with an overview of his current busy work schedule”.

A bank official told Mr Perry the €2.46 million was his problem but the officials were there to try and find a resolution for him and it was up to him to advance “realistic” proposals, the minutes noted.

An official expressed surprise at the lack of response from Mr Perry over the previous six weeks and indicated sales of property and other measures would be viewed favourably by the bank, the minutes noted. The official also indicated the bank had issued a demand and the next step would be “judgment” if satisfactory settlement proposals were not received.

Mr Perry had indicated his side had not been doing nothing over the past few weeks but nothing had come of an approach to buy a particular property, the minutes said.

Mr Perry’s financial adviser had said the person approached about the sale had said he would review the issue over the summer months but an official responded they did not have until the summer and the potential purchaser should be advised of that, the minutes noted.

Mr Perry then said he had had discussions with AIB and would make a formal application the following week and had also advised he knew Richie Boucher of BOI, the minutes said. Danske had advised him to contact whatever banks he had relationships with “to get an offer to take us out”, the minutes noted.