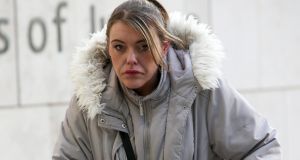 A man accused of murdering his love rival was hit with a sudden and ferocious attack from his partner’s lover and was entitled to defend himself, a barrister has told the Central Criminal Court.

Michael O’Higgins SC made his closing speech for the defence in the trial of Keith Connorton (40) who has pleaded not guilty to murdering 32-year-old Graham McKeever at the accused’s home at Deerpark Avenue, Tallaght, on February 18th, 2017.

Mr O’Higgins described how Mr Connorton arrived home at around 4am on February 17th cold, wet and tired. He put bread in the toaster and put on the kettle.

His only intention at that point was to have a snack and go to bed, Mr O’Higgins said.

Claire McGrath, the accused man’s partner who also lived in the apartment, gave evidence that she and Mr McKeever were preparing to “copulate” in the bedroom when they heard Mr Connorton. She went to the kitchen and told him to get out, that they were finished but he realised there was someone there and an argument started.

Ms McGrath, in her second statement, said Mr Connorton took a knife from the knife block and threatened her but in her evidence in court said that he was cutting cannabis with a knife when she walked in.

Mr O’Higgins said neither of these accounts is reliable but what is true is that Mr McKeever “barrelled in”, attacked his client and left him with a fractured eye socket.

Mr O’Higgins asked the jury to consider what the accused was supposed to do given the “suddenness and ferocity” of the attack in his own home at 4am from a man he does not know. “Was he supposed to stand there and do nothing?” he asked.

He said the prosecution seemed to be saying that he should “do nothing and hope for the best” but Mr O’Higgins said he was “entitled to defend himself and to think the worst when the blows are raining down.”

The accused man told gardaí he was left dazed by the attack, “blacked out” and when he came to Mr McKeever was retrieving a knife from the kitchen. “He came at me,” he said.

The prosecution contended there is no evidence Mr McKeever had a knife but Mr O’Higgins pointed to a cut on Mr Connorton’s hand. He asked the jury to look at the photographs of that injury which he said is consistent only with grabbing the blade of a knife.

It follows, he said, that the other person, Mr McKeever, must have been holding the handle.

Counsel told the jury they cannot rely on statements given by Ms McGrath who on her own admission is not a reliable witness. He described her as a vulnerable, damaged, insecure person who is also likeable, bright and articulate and of “unlimited potential and energy that, if it is well harnessed, could achieve spectacular results.”

But he pointed to what he said were lies she told to the jury and explained that the prosecution had been allowed to cross-examine her on the basis that they believed she was not telling the truth, having changed her account from her original statements.

He asked the jury to consider that if she lied about some things to them how could they be sure she did not lie in February 2017. She could, he said, have lied in favour of Mr McKeever, a man she loved at the time, and against the accused man whom she hated and blamed for the “woe in which she found herself”.

He described the relationship between the accused and Ms McGrath as “bumpy”. They both had drug addiction issues and while they were trying to get clean they frequently argued.

On the Tuesday before the stabbing they argued and, as usual, Mr Connorton left. But Mr O’Higgins said this row was not one of their normal rows, it was contrived to allow Ms McGrath invite Mr McKeever to the apartment.

Mr Connorton, counsel said, was “put out to be replaced”. This was one of a number of reasons why the witness is “compromised”, Mr O’Higgins said.

He added: “Someone she was in love with was killed by a man against whom she holds at the time deep resentment.”

Mr O’Higgins further criticised gardaí for not recording Ms McGrath’s statements so that the jury would now be able to assess what she said and what state she was in.

During the trial, Ms McGrath said she was “out of my head” and did not remember giving the second statement which was taken at her mother’s home after she had been given an injection of Valium to calm her down.

Ms McGrath, in her second statement to gardaí, said Mr Connorton took a knife from a knife block and threatened her but in her evidence in court she said that the accused was cutting cannabis with a knife when she walked in.

In his closing speech Brendan Grehan SC said that the accused’s account, in which Mr McKeever had the knife but the accused managed to “turn it around” was a “pack of lies”. He said the jury can rely on Ms McGrath’s original statements to gardaí which, he said, she accepted were mostly true.

He added: “It is only the bits that don’t suit Keith, the partner she loves, that she changes.”

He added that there is no evidence Mr McKeever had a knife. The knife wounds were suffered by Mr McKeever, the “bigger, stronger, younger man,” who Mr Connorton claims to have overpowered, counsel said.

The pathologist, he pointed out, had outlined four stab wounds, one of which injured the heart and caused his death. She also noted 10 “swipe” injuries consistent with being cut by the tip of a knife.

“The suggestion that Mr McKeever introduced a knife is unsupported by any of the evidence in this case and that is why we ask you to return a verdict of guilty of murder.”

If the force used in defending himself was proportionate to the threat then the jury must acquit, he said. If the force used was excessive but he believed it was reasonable at the time then he is guilty of manslaughter.

He can only be guilty of murder if he knew the force was excessive and, “bloody-minded, went on and killed him”. Counsel further told the jury: “You have to look at it through the eyes of Mr Connorton.”

Justice Tony Hunt told the jury they must also consider the defence of provocation whereby if Mr Connorton was provoked by the situation in which he found himself to a point where he suffered a sudden and total loss of self control then he would be guilty of manslaughter and not murder.

The jury will begin their deliberations on Friday.